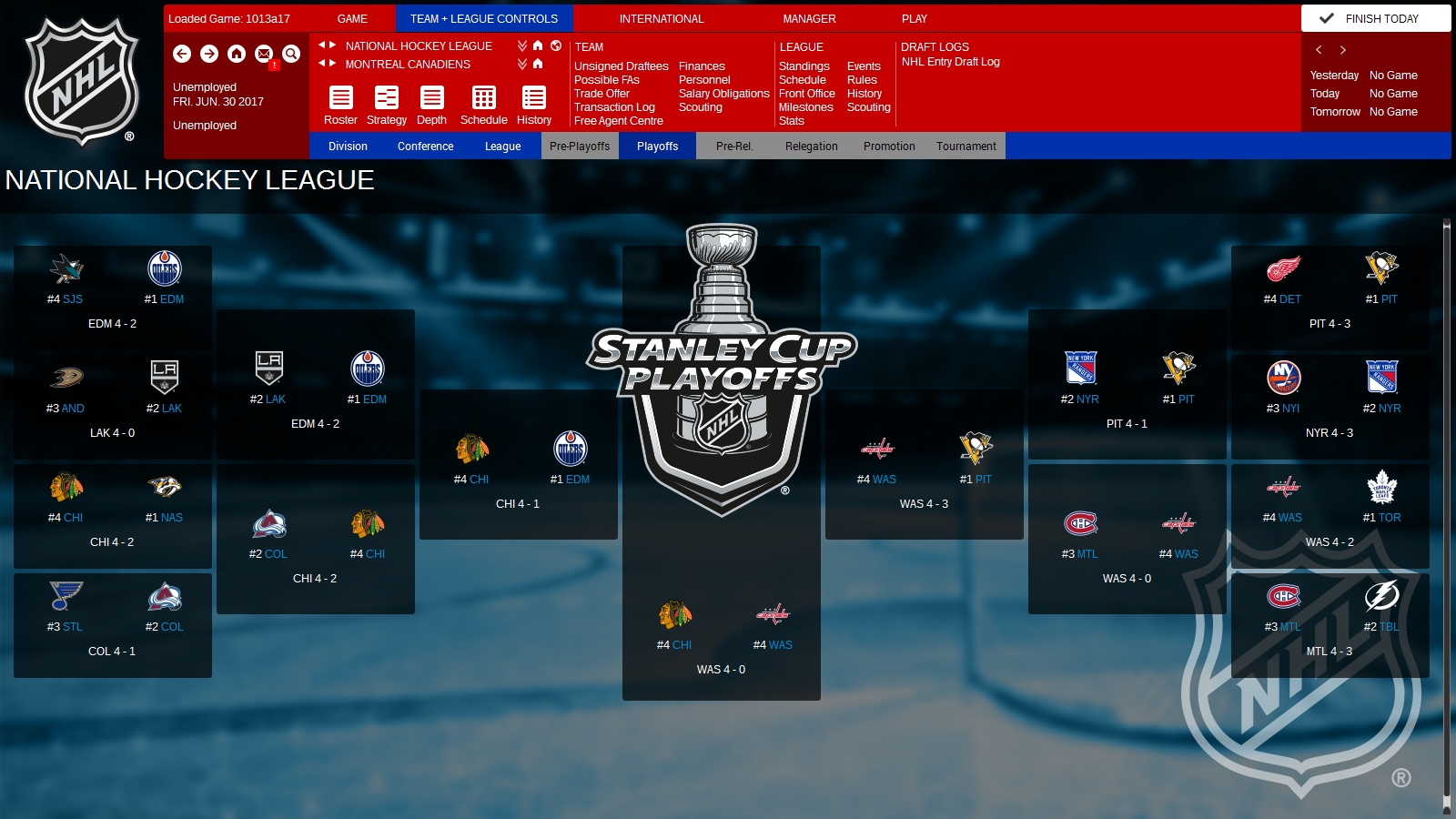 Franchise Hockey Manager 3, the upcoming hockey strategy game from Out of the Park Developments and, for the first time, licensed by the NHL, has released its annual simulation of the 2016-17 NHL season. In addition to the NHL, FHM 3 also simulated results for all of the minor leagues in North America as well as many European leagues and the international World Championships.

The big news is that, for the first time ever, the Washington Capitals will win the Stanley Cup! In the FHM 3 simulation, Washington defeated Chicago, 4-0. The series was actually a complete blowout for the  Capitals, who outscored the Hawks 21-4 in the series: 2-0 in Game 1, 6-2 in Game 2, 7-1 in Game 3, and 6-1 to lift Lord Stanley’s Cup above their heads. 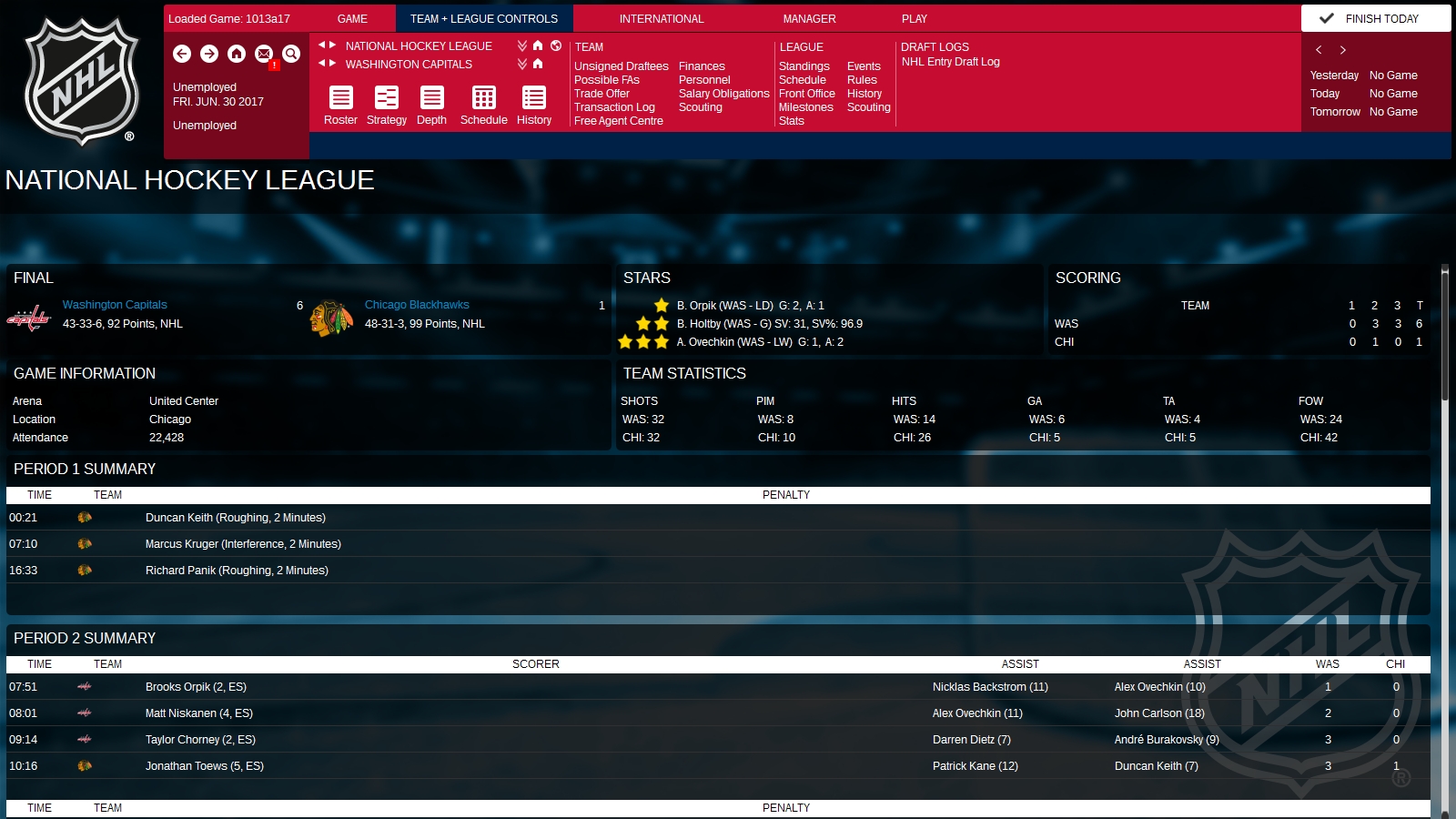 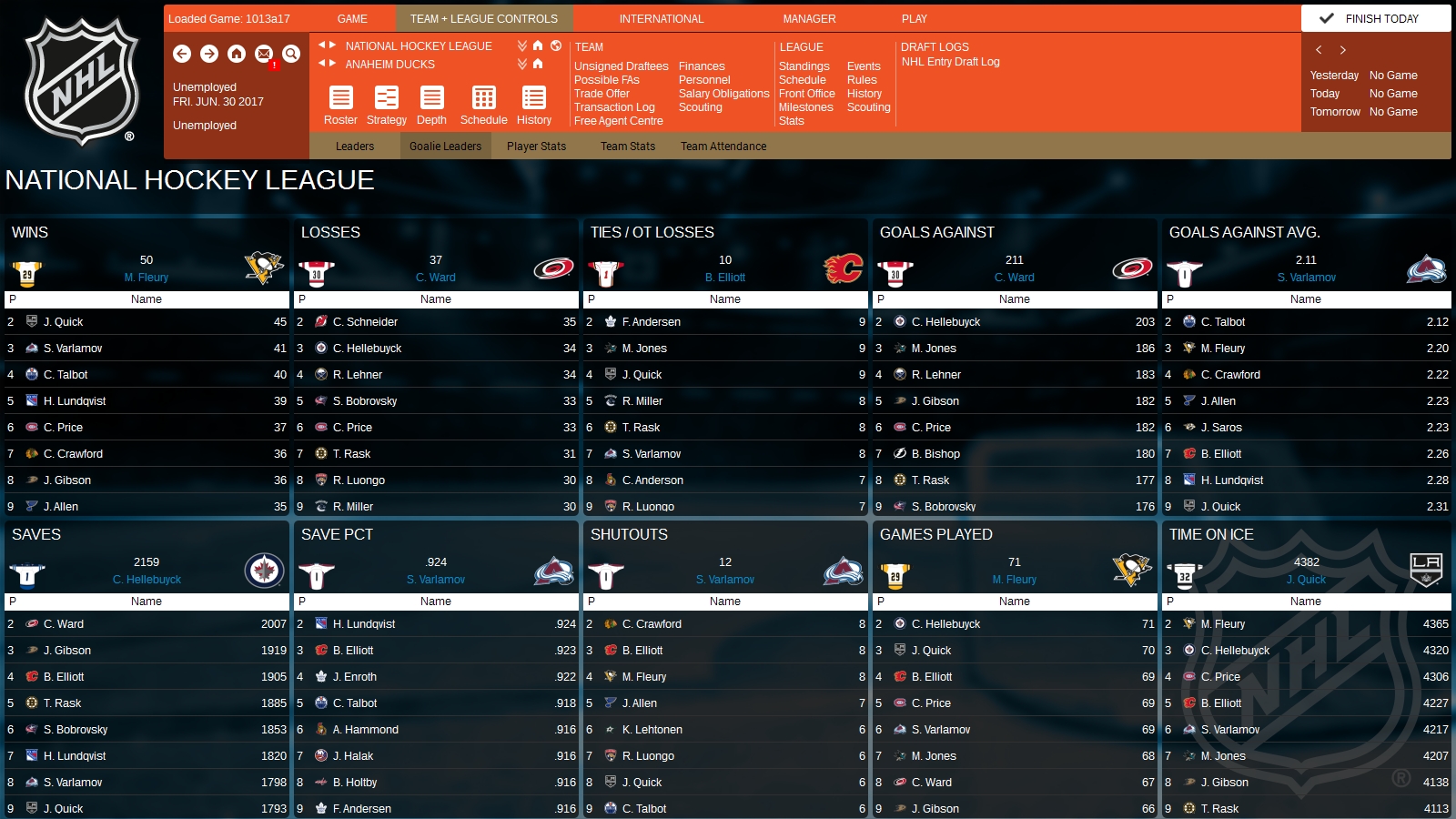 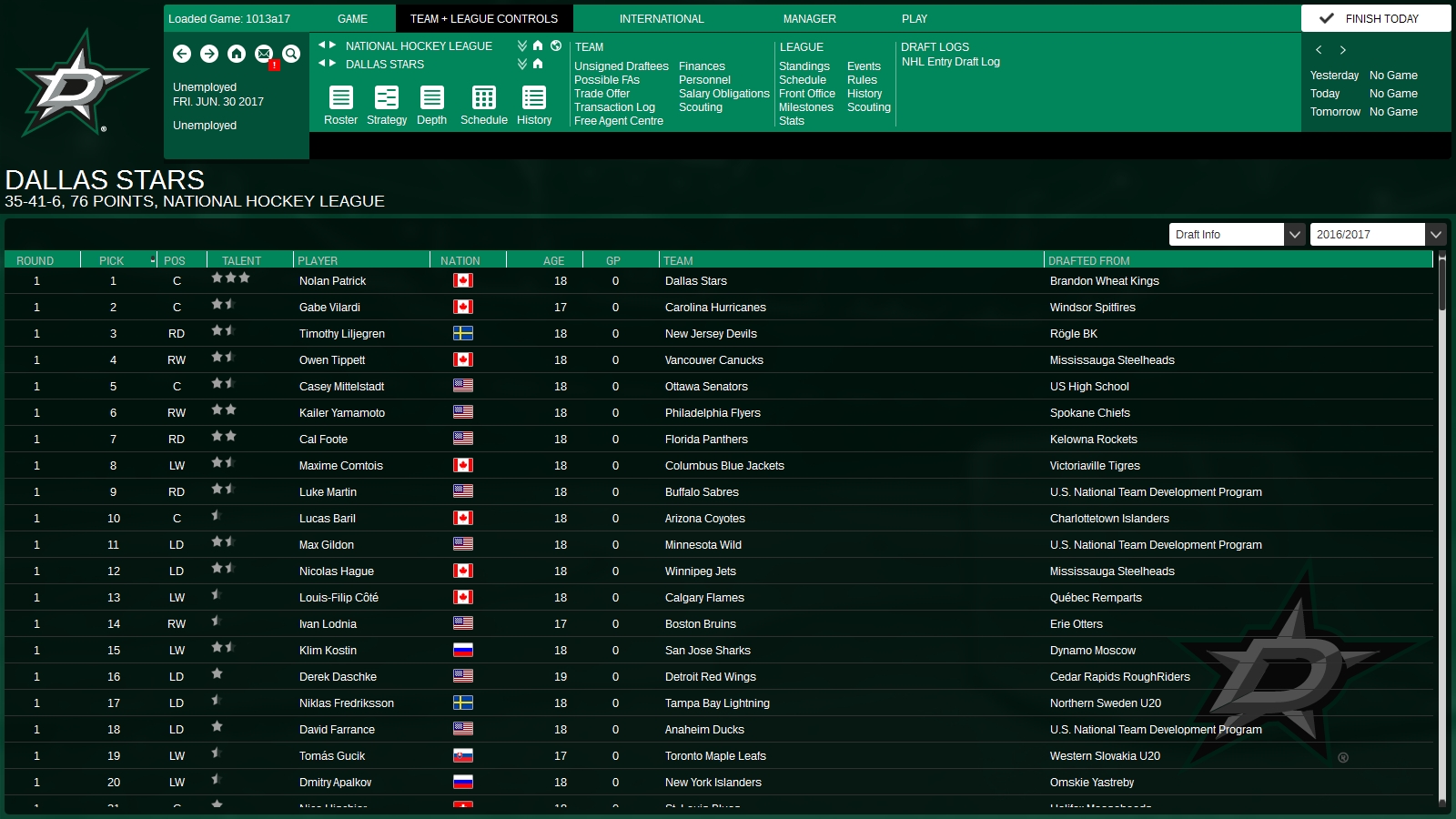 -Edmonton and Toronto as surprise divisional winners
-Phil Kessel led the league in +/- with +49 (played with Crosby most of the year)
-Results of Webber-Subban trade: Nashville 1st in the Central (and made playoffs but were upset by Chicago in the opening round, after which Subban played for Canada in the World Championships and was tournament MVP), Subban wins Norris with 73-point season; Montreal 3rd in Atlantic , Weber had 45 points
-Other prominent rookies besides Matthews: Patrik Laine (WPG), 34 points in 77 games; Jesse Puljujarvi (EDM), 24 points in 79 games; Pierre-Luc Dubois (CBS), 16 points in 82 games, Jusse Saros (NSH) was the top rookie goalie, 2.23 GAA and .914 save % in 23 games)
-Biggest trade of the year: Mark Giordano from Calgary to Edmonton for Leon Draisaitl
-Prominent unrestricted free agents in summer of 2017: Steve Mason, Brent Burns, Kevin Shattenkirk, Ben Bishop 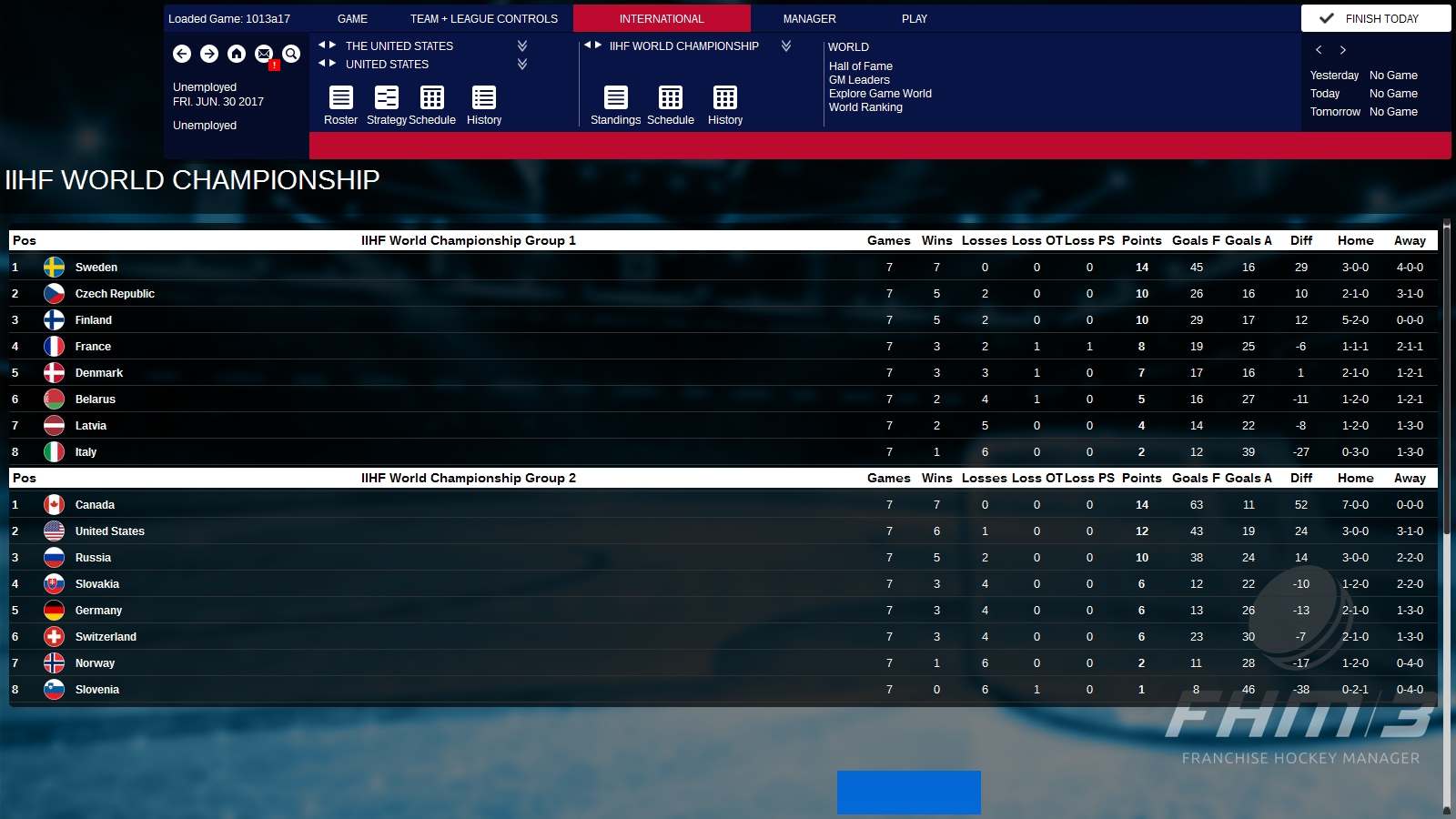 Franchise Hockey Manager 3 officially releases later this month on PC and Mac. Pre-order here for a $10 savings off the $39.99 retail price and to receive an early beta copy!

Disclosure: Rich Grisham, co-founder of Hit The Pass and writer of this article, works for Out of the Park Developments, makers of Franchise Hockey Manager 3.