How “Australian” is Forza Horizon 3?

Since it was unveiled at E3 earlier this year, Forza Horizon 3 has celebrated and heavily promoted its Australian setting. But how Australian is it really?

Let’s start with some superlatives.

In respect to terrain and flora, Forza Horizon 3 does a remarkable job capturing the look and feel of the Australian countryside. The ‘bush’ (a uniquely Australian descriptor for anything ranging from a few trees to the entirety of everything that is not the city but not quite the outback) is beautifully and accurately realized.

The transitions are amazing as you go from lush temperate rainforests of New South Wales and Queensland through the farming land, the gradually more arid grass lands and Eucylypic forests before hitting the arid, red center.

Despite being Australia on a postage stamp, Playground has managed to translate the visual sensation of the cross country drive in Australia with remarkable nuance and sophistication. 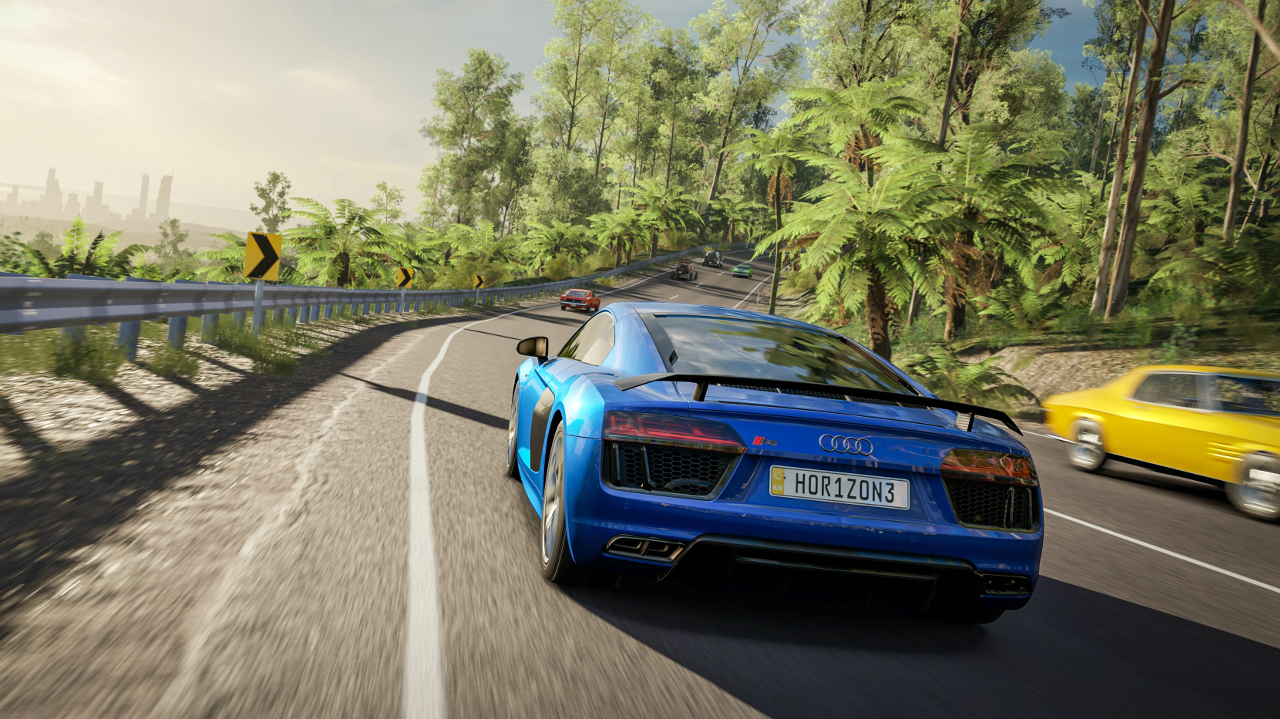 The rolling hills, the dry river beds, the rocky outcrops, tidal estuaries, and red dust are all present and rendered faithfully. Much was made of the skybox prior to game’s release and justifiably so. It is gorgeous as clouds roll across and form powerful storms in the distance. This skybox helps convey the sense of scale in the outback (although I’ve got no idea what the snowy peak in the distance is meant to be). The Australian Alps only receive snow in winter and we are told in the opening cinematic that the game is set in summer.

The Gold Coast, a place I’m personally very familiar with, is also remarkably well realized. It is by no means a 1:1 copy but Playground have captured the headline buildings, the canals and their multi-million homes, and the many of the key landmarks.

North of the Surfers’ Paradise hub there is a park split in two by a waterway. This park exists in real life and seems particularly familiar in the context of Forza as it is encircled by the Gold Coast street circuit famed for Indy Cart racing in the 1990s and 2000s.

In the city suburbs there are little touches of Australia everywhere. Houses have two bins (the black for general waste, the green with a yellow lid for recycling), the post boxes are red, and the phone booths have the familiar blue and yellow of the national telephone carrier.

On the road, the signs and road marking are generally very accurate but lack the regular alert signs for wildlife that dot Australian highways. The lack of fauna is decidedly un-Australian, however. In the game’s opening cinematic we see kangaroos but these aren’t seen again save for loading screens. While kangaroos aren’t as pervasive as TV makes them out to be, there are plenty in the ‘bush’ (a mob of kangaroos live less than a mile from my suburban home) and their sudden disappearance from the game may be a bad omen for the ecological damage that the horizon festival has wrought.

Likewise, despite the presence of rolled hay in pastures there are no cattle, no horses, and no heep. Australia is a proud agricultural nation and their absence makes the world feel a little less lived-in. On the road the headline Australian icons of motoring are captured. In particular, the Aussie Ute, a hybrid sedan / utility vehicle is celebrated in the game throughout. The non-competitor vehicles, though, are less Australian. There are no giant b-double trucks (the infamous road-trains that dominate the outback roads), no caravans and no ever-present SUVs. 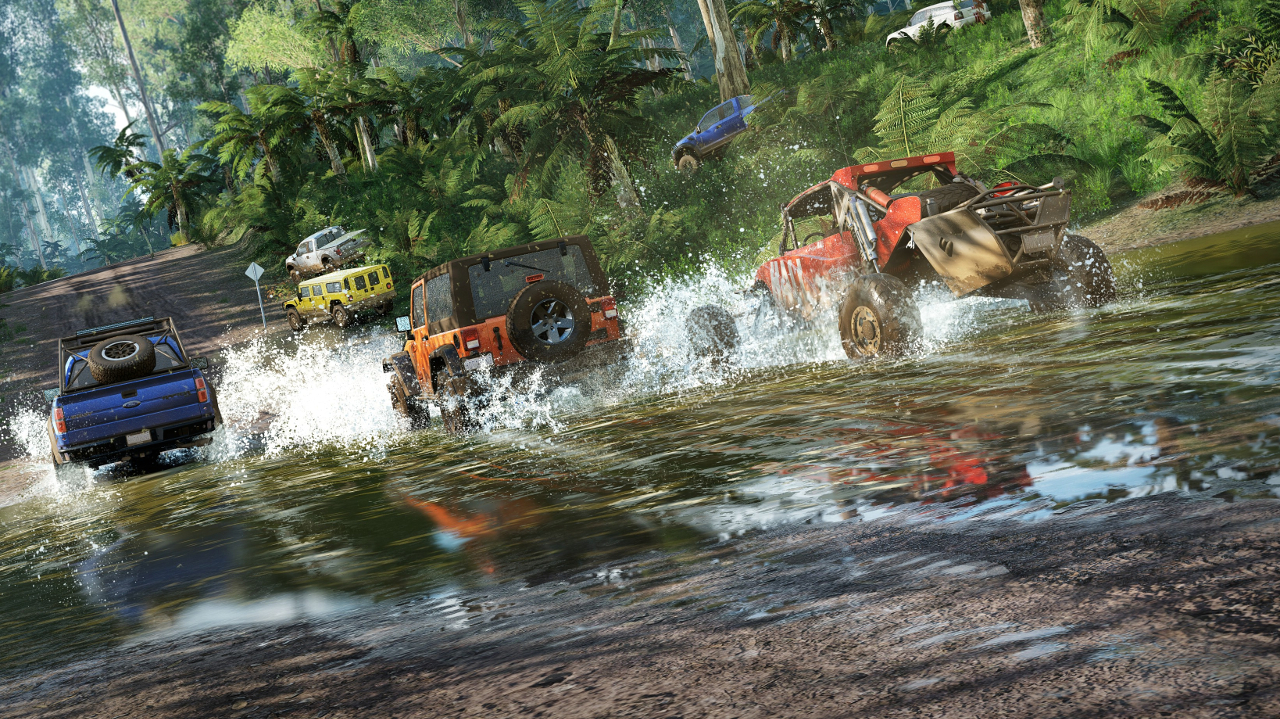 Playground has been selective in its imagination of Australia. The sprawling cities of Melbourne and Sydney are elsewhere and they avoided the temptation of placing a virtual Uluru in the middle of their version of the outback. The lack of Uluru (or Ayres Rock as the Europeans called it) is a wise choice. Uluru is a sacred site for the land’s Traditional Owners as its representation in a game where launching cars off structures is a core mechanic would be problematic.

Musically, the Aussie flag is flown through independent hip hop & EDM channel spun by a pleasant, hipster Sydney-sider. The real treat, though, is the DJ of the local community-run classical music network, ‘Timeless FM’ who complains about the traffic caused by the festival but dutifully passes on hints about the location of barn finds. In a game of amazing highlights, color and excitement his droll personality manages to oddly provide a genuine sense of place.

Your mechanic, Warren, also certainly sounds Australian. Or at least he sounds what people overseas think Australians sound like. I’m not sure Warren actually is Australian. You see, Warren would not be known as Warren in Australia. He’d be Wozza or just Woz, the same way that you wouldn’t meet a James in the Southern part of the United States.

Overall, it is incredible how much Forza Horizon 3’s world looks like Australia. Surprisingly and tellingly the representation is most faithful when you slow down. Driving slowly past the old weatherboard stores on the Coober Pedy Main Street which looks like every small country town or near the glasshouse mountains where tree ferns search for sun under the forrest canopy conveys a remarkable sense of the Australian landscape.

As an Australian who has travelled the breadth of my country, trust me when I say Forza Horizon 3 has replicated Australia incredibly well.

If you’d like check though, you’re more than welcome to visit the amazing land down under and see for yourself.