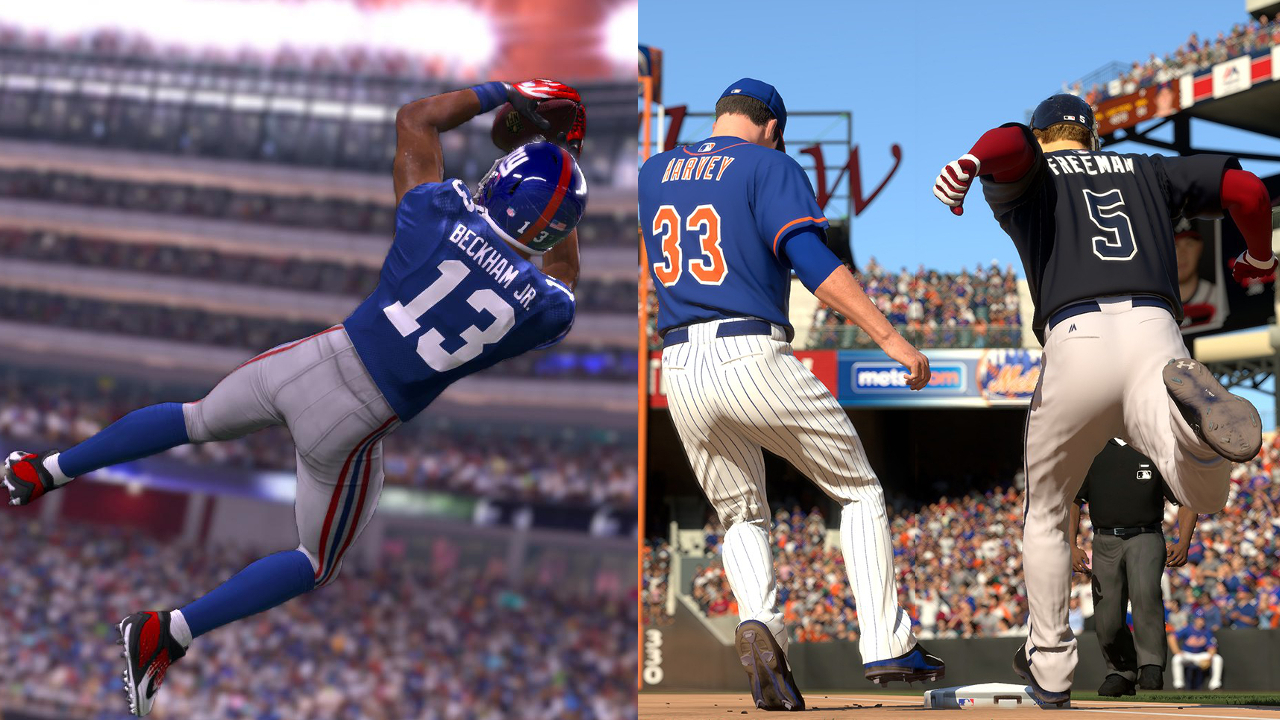 Madden or The Show?

It’s a simple question, really – given a choice between the two big games representing the two big sports being played right now, which would it be? We recently compared and contrasted the two games on an episode of the Press Row Podcast. Would you opt for baseball and Sony’s sublime MLB 15 The Show? Or would you lean toward the gridiron with EA’s Madden NFL 16? Both are great games, of course, so there’s no wrong answer. Or is there?

Baseball is in the pennant race and football has just kicked off. So, today, if you could only pick one, what do you go with? Madden or The Show?

I am entirely captivated by MLB 15 The Show, so that’s my answer. It’s not really a knock on Madden, where we haven’t even started our online league yet. I’ll play plenty of NFL football this year, there’s no doubt. But even so, The Show is so smooth, so smart, so well-crafted, and so nuanced that I can’t go in any other direction.

This answer should be super simple. Football is the more exciting sport. The NFL Week 1 just concluded. Madden NFL 16 is the new hotness but why is it that it’s MLB 15: The Show that’s getting all of my time and attention? The beauty of The Show is in the details. The minutia of experiencing a day at the ballpark is so brilliantly represented in Sony San Diego’s latest entry that I can almost smell the peanuts.

I think there’s another, more compelling reason that I’m still heavier on The Show than on Madden: I’m deeper into Road To The Show than I am in Madden’s Franchise mode. I generally don’t start a Franchise with my friends until the season begins so we can get the most current rosters for the start of the season. Until then it’s all been about getting my third baseman, Frank Sanders, to the top of the hardball mountain.

So for today, The Show continues to win the coin flip over Madden. Everyday, however the odds move ever in Madden’s favor. I doubt the impending release of NHL (though seemingly very good) will buck that trend. I’m just glad I’ve got 3 full weeks until the NBA games release. Oh, wait….

The NFL is my sporting obsession, fueled in large part by Madden. In contrast, while I appreciate the skills involved in baseball, as an Australian the game has never held my interest. When I am seeking an arcane, bizarre bat and ball game, cricket has served that purpose.

That said, I’d pick the Show over Madden for two simple reasons. Until this year, Sony’s showpiece sports title was never released in Australia. Accordingly, my exposure has been limited to an imported copy and thus the game holds a certain curiosity.

The second is that the Show’s presentation is superior to Madden and that I’m drawn into the tactile experience of baseball by the game more than Madden’s translation of football which I find has grown stale and rote.

Over the coming months the answer will probably shift to Madden, as our online franchise progresses, but currently it’s The Show.

The game is such an authentic representation of the sport. Demanding but satisfying. Being able to play in a functioning online franchise, and even play some online games successfully(!) has taken the game to a new level.

Madden isn’t as rich of an experience. On the field it’s maybe as fun as ever, but franchise and presentation have been a disappointment.

I am completely enamored with The Show. That’s not to say that Madden is not a great game this cycle, but my football league fix has been fulfilled regularly over the years.

Online baseball on the other hand has been a barren wasteland for the majority of the last decade. For me this years offering has been the perfect storm of a baseball video game. The Show has always had great game play quality, but lacked even functional online capability.

Almost out of nowhere this year the proverbial clouds have parted and online is not just working – it is working well. This has inspired me to try modes that I normally brush off as fillers or cash grabs.

Not since MVP Baseball 2005 have I enjoyed a sports game this much. It is said that absence makes makes the heart grow fonder. Apparently nine years of no functional online baseball has made me very fond of the experience. I have no intention of putting The Show down this year.

Madden, easily. In fact, while I’ve purchased all of the Madden games for my PS4 so far, I’ve not bought either of The Show releases. I’ve never been enamored with The Show, as I’m not a diehard baseball fan. My past experiences with the series on the PS3 felt too “sim”-my and not all that accessible. Granted, my frustration may stem from my preference towards arcade-style play from yesteryear, but it is what it is.

It’s also more a personal preference of sport. Football is, to me, more exciting and engaging than baseball. Seasons are shorter, games are more meaningful. Games are shorter, too.

As a PS4 owner, there’s also the issue of storage space that factors in for me. The Show requires a lot more hard drive space– about double the amount that Madden requires. As much as I love sports games, I do play other games and don’t really want to spend extra money on upgrading the paltry 500GB hard drive in order to house all of my game installs and save data.

While I acknowledge that The Show is a fantastic series, Madden (and NHL, to be honest) win the battle for my gaming dollars and time over The Show every year… and that streak likely won’t be broken anytime soon.

@HitThePass For me it’d be @EAMaddenNFL but that’s just because of my utter disdain for @MLB. When it comes down to it, @NBA2K rules all. — Matt Lancaster (@Lanksalot81) September 14, 2015

@HitThePass @MLBtheShow_Tips Madden because even though baseball is fun, The Show keeps freezing and makes games hard to play unlike Madden.

@HitThePass The Show. Madden’s Franchise mode is embarrassing. The Show’s could be better, but it works and gets the job done. — Donovan Marston (@LexMarston) September 14, 2015