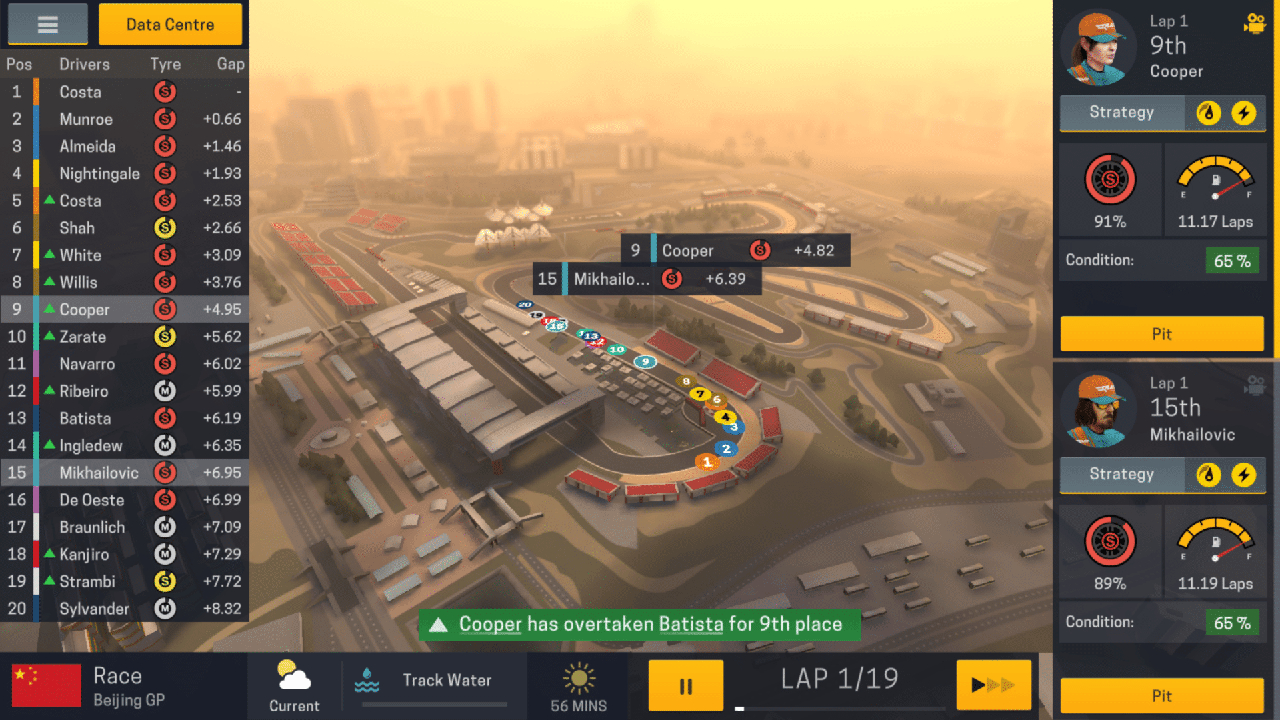 In Motorsport Manager 2 by Playsport Games you take the helm of an open wheel race team and compete for glory on three different world tours. The game is a sequel to Motorsport Manager which debuted on iOS in 2014 and then came to Android in 2015 and PC and Mac in 2016.

MM2 places you in the role of team principal which means you do everything from signing drivers and sponsors to deciding which parts to upgrade on your car and how many resources to allocate toward next year’s car.

Gameplay is quite similar to the first game though there have been refinements and updates. Drivers make mistakes, spin, and commit and serve penalties, all of which I noticed for the first time in MM2. The familiar safety car and virtual safety car return, too.

I hired and fired drivers and race engineers along the way as I learned how different car setups and strategies affect qualifying and race performance.

Race strategy remains key to winning in MM2 just as it was in MM1. Although it took a few seasons I learned the setups and tracks where my team did well and those where we struggled. I dedicated most of my resources to cars that performed well on long runs, a strategy which helped my team run well at tracks with fewer corners and more straights. By the same token my team struggled at short, winding tracks with 10 or more corners.

I came to see qualifying as a way to test different race setups. I often used my second driver (aka the lesser of the two cars) to test different setups in qualifying so that I’d have an idea of the strategy to use for my first car (the better performing car). I also learned that all the strategy in the world goes out the window when qualifying is dry but the race is wet. Real life race teams face similar dilemmas every weekend worldwide and I was glad to encounter them in MM2.

Since you spend so much time at the track in MM2 you’ll learn quickly that race strategy really comes down to four things: your car, your tires, your fuel load, and your pit stops. I opted for harder compound tires when starting outside of the top 10 and softer tires everywhere else. I dialed down our fuel usage when we had a big lead and ramped it up when we were trying to work our way through the field. I pushed the tires on the last few laps before pit stops and conserve them during long green flag runs. The more you race the more you learn what combinations work best at which tracks. In the entry level European League I knew my team would fare well in Germany and Italy but struggle in Russia and Qatar.

Fans of MM1 will find the sequel an enjoyable and refined version of the now familiar gameplay. MM2 contains more tracks, more sponsors and more realistic rule packages, all of which impact strategy. If your race team is second in points heading into the final three races of the season do you gamble everything on the final race of the season since it’s worth double points in some series? If your team is struggling midway through the season do you pack it in and dedicate all of your resources toward building a better car for next season? Do you sign lesser quality sponsors who offer immediate cash influxes or gamble on your team’s ability to meet sponsor bonuses for even bigger paydays? These are all questions I asked myself while playing–and enjoying–MM2.

If you love Formula 1 and have dreamed of calling the shots in your own race team, check out Motorsport Manager 2. You’ll find a deep and immersive game worthy of your attention that gives you that “just one more race” feeling.

Thanks to Brendan Wilhide for the look at Motorsport Manager 2. The game is $3.99 and currently available only for iOS devices.