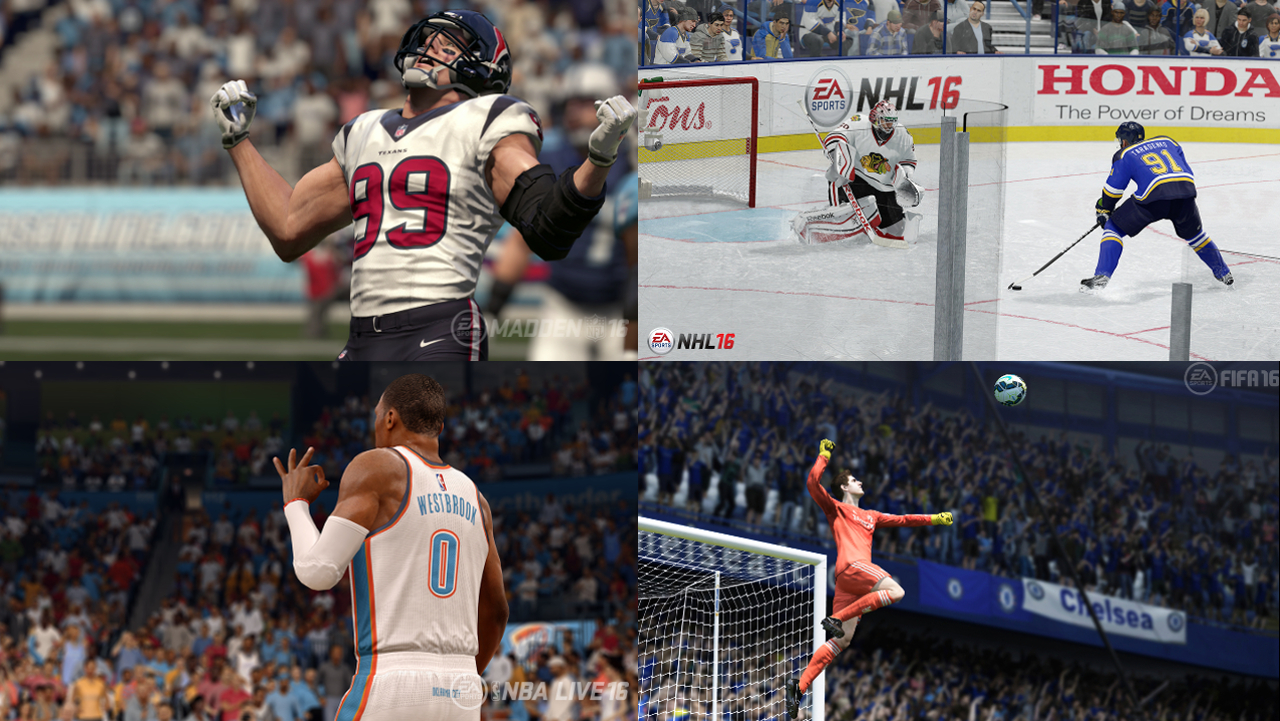 There used to be a time when sports games released practically year round. Consumers weren’t forced into making purchase decisions based on having to pick one game over others, but rather individually on the merits of each product. Even sports that had multiple games representing them – those sure were the days – didn’t necessarily all release at the same time. Options were plentiful and the release schedule was open enough to allow all the games the opportunity to succeed.

Those days have long since come to an end. The sports genre has contracted to fewer than 10 traditional sports games per year, the majority of which release in a singular, narrow window. The situation is more compressed than ever this year, in fact. The two NBA games – 2K Sports’ NBA 2K16 and EA’s NBA Live 16 are moving up from their standard October releases into September.

In a five week period that begins August 25 and ends September 29, the following sports-related games will all release:

Inevitably that means some some of the games will have absolutely no shot with consumers. The vast majority of people that play sports games for fun don’t have $540 laying around, which is the cost of buying all nine titles at the standard $60 price tag, or more reasonably lets say $180 for three of them within the same month. Consumers will have to prioritize like never before. That’s bad news for games that have struggled recently or those trying to build a name for themselves. Inevitably people will stick with what they know over what they don’t, which is the safest decision to make with their money.

There’s also plenty of other competition for dollars in the marketplace over that same period. Massive franchises releasing new sequels like Metal Gear, Halo, Tomb Raider, Assassin’s Creed, Call of Duty, and dozens of others appeal to many sports games fans as well.

Case in point: no matter how much better NBA Live 16 may be over its past two iterations, inevitably that game will find itself at the bottom of the totem poll with almost all potential consumers. They aren’t going to take a risk on a game when they have more appealing options available at the very same time, including the wildly popular (and still growing) NBA 2K16. Others like NHL 16 could have a more difficult time recovering from a down year where it lost about half of its consumers in the transition from NHL 14 to 15. It becomes not just about if those people would consider returning, but also whether the competition from the other games make that question moot to begin with.

So how would this dilemma be solved? How would we alter the fact that 75% of the sports games for the entire year are shipped in such a slim window?

In an ideal world, here’s how the sports gaming schedule would be laid out:

That leaves the ultra-competitive November through the generally dead months of December, January, and February open to non-traditional sports games, indies, and arcade games. They could fit elsewhere throughout the year but would face stiffer competition. Others like racing and skateboarding could slide in anywhere on the schedule as they don’t have to concern themselves coinciding with “seasons” that play a big role in relevance and determining their prominent sales period and digital revenue collected over time.

The biggest movement would be with WWE – which makes far more sense to release in the lead-up to Wrestlemania than in the fall – while the soccer games would move into July to get out in front of most seasons around the world kicking off (including the Premier League), and the NBA games could then back up closer to the start of the actual season in late October.

Making a major change to a release date for an established property is a difficult decision for a publisher to make. Games would have to be either delayed – something investors would not want to hear – or pushed up which means briefer development cycles for that first year, and with that the potential of a disappointing feature set. We’ve seen how detrimental that has been to consumer interest just recently with NHL 15 and Rory McIlroy PGA Tour.

However, the ability for a game to breathe in the market (or something timely to take advantage of with a new date) could mean better sales and supply the justification publishers would need to make such a move. Game makers need data to support that – it’s mostly speculation and a leap of faith right now, something that rarely gets past an off-handed remark in a corporate setting heavy on analytics and margins – making it understandable that they haven’t done so as of yet.

Could EA Access, the terrific subscription service which offers arguably the best value in all of gaming, eventually be an answer to these concerns? A subscription service, for brand new games and not just those added as their relevance begins to fade, could be a solution for consumers who have interest in multiple games but can’t justify buying them all individually. That wouldn’t solve the problem for non-EA games but it could alleviate the pressure on consumers to pick and choose rather than getting all the games they want, had the releases been more spread out.

Fans of the NBA 2K series were excited to hear they’ll be able to get their hands on 2K16 earlier than anticipated. That move up though has done more harm than good when considering the entire landscape of the sports gaming genre. This is a serious problem that could harm the viability of multiple franchises in the coming years if changes aren’t made.

There will come a point when sports game fans’ wallets will simply say “No Mas”. There have already been indications of that in recent years, as sales for most franchises continue to slide, and publishers rely on the digital revenue to compensate. Will the fall of 2015 be the breaking point? It’ll be the biggest test of consumer dedication yet.