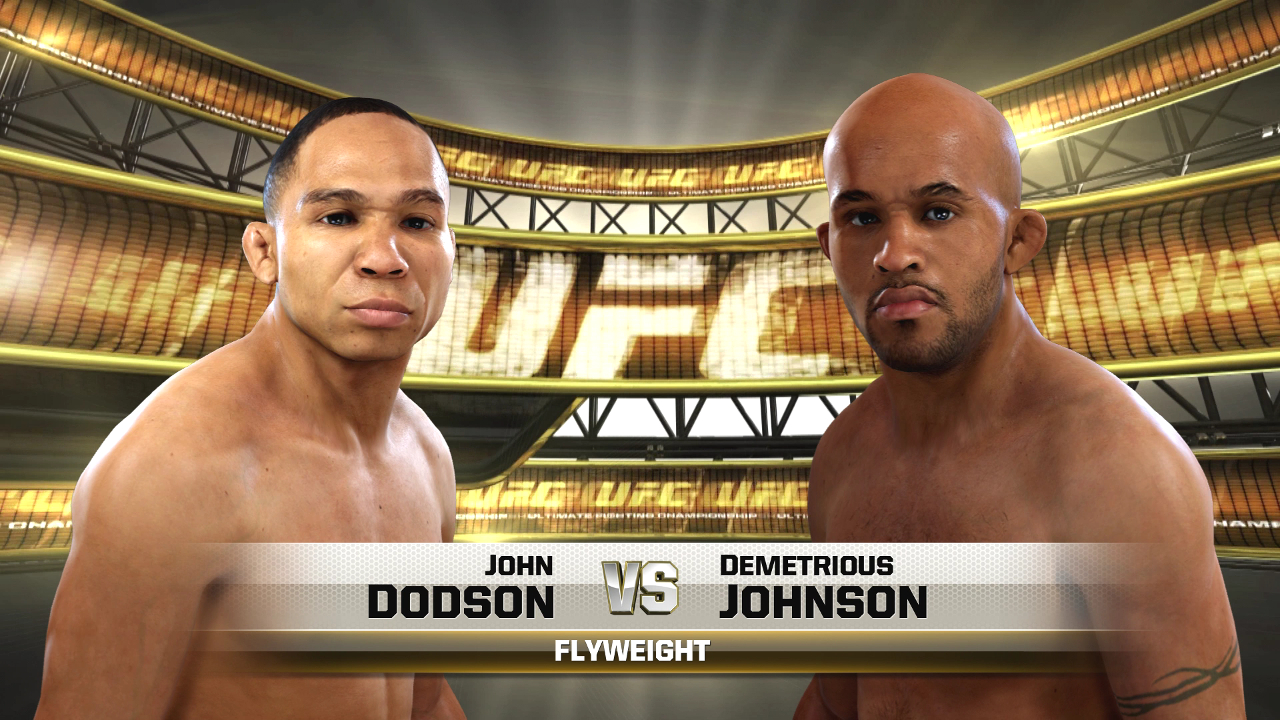 We simulate the UFC 191 main event

UFC 191 takes place in Las Vegas this Saturday and is headlined by the Flyweight Championship. The belt currently belongs to Demetrious Johnson and he’s taking on #1 contender John Dodson. This is a rematch of a fight from 2013 which was won by Johnson in a close but unanimous decision. Will the outcome be the same this time around? We turned to EA Sports UFC to find out.

The first round of this fight was a striking affair, and could have easily been the sixth round of their previous bout as the difference between the two remained razor thin. A knockdown with a minute remaining in the round wins it for Johnson.

Round two saw the fighters go toe-to-toe yet again. Johnson took it as well on the strength of his counter striking and octagon control, giving him a 2-0 advantage at this point in the fight.

Dodson turned up the aggression in round three. He started to realize that he wasn’t going to win a technique battle with “Mighty Mouse”. Striking volume and some of his signature high risk strikes were enough to keep Johnson on his heels giving Dodson his first round.

Round four continued to muddy the waters of finding a winner. Dodson got the nod based on raw numbers. He threw the most strikes, if only by a slight margin. I would hate to be a judge if this was a real world fight.

The fifth round is a nightmare to score. In situations like this you have to look at who put the other man in the most danger. Dodson lands a critical takedown late that left an an impression on the judges. It did so for me so I have to give him the round, and thus the fight in this simulation.

I can not pick against Demetrious Johnson. I have followed his career since he was a amateur winning belts at community colleges in Western Washington. Watching his evolution into the best pound-for-pound mixed martial artist in the world is the main reason I have become so enamored with the sport.

That being said, Dodson is a very dangerous opponent. He does have a tendency to swing wildly but his elite speed covers up many of this shortcomings. It is odd to think such a thing with a fighter as fast as Johnson, but he needs to slow this fight down. Using his world class footwork and technical striking will frustrate Dodson into rushing in with wild maneuvers. All that he has to do is avoid the type of lighting quick punch that dropped him in their first fight. He is the only Flyweight Champion in UFC history for reason. “Mighty Mouse” will take another decision from Dodson, just in more definitive fashion this time.