A faster pace early on in this game than the prior one. Stephen Curry hits a three a few minutes in which is a good sign for Golden State.

Kyrie Irving drives to the hoop, gets the basket and the foul, to capture an early lead.

The Cavs would go on a run and extend the lead to as much as 9 points. Andre Iguodala hits a big three late in the quarter to pull within four.

The Cavs outscore the Warriors 25-21 in the first.

The game tightens and remains that way a few minutes into the quarter when Timofey Mozgov jams one home on a nice feed from LeBron James.

LeBron has been heating up. He has 18 points mid-way through second. The Warriors are hanging close though. On the break Curry finds Klay Thompson for a three-point play that ties the game.

Watching the game it feels like the Cavs are in control, given that the Warriors haven’t really caught fire at any point which their offense is fully capable of doing, but it goes into the half all tied up at 52.

The lead exchanges hands several times in the early stages of the third quarter. Curry gets a nice shot here to capture the lead.

Lebron just would not let the game get away from the Cavs. When needed he answered.

Thompson hits a three to keep give the Warriors a small cushion. That lead would extend to as much as 8 but LeBron and company kept them within reach.

Heading into the fourth the score is Golden State 83, Cleveland 77.

There were a number of big plays early in the quarter. LeBron James takes over with authority grabbing the offensive board and slamming it home. He gets another jam on the very next possession.

Not much later Leandro Barbosa gets a big steal and finds Shaun Livingston beating the Cavs down the floor for the dunk.

What would a big NBA game be without some controversy? Up 6, with just over 3 minutes left, Andrew Bogut is assessed a Flagrant 1 on a foul to Mozgov. He would make one of the two free throws but the Cavs would not score on the ensuing possession.

The Warriors respond with Thompson finding Bogut for the jam which puts them up by 7.

After LeBron James hits a three, Harrison Barnes knocks one down in what at the time felt like the dagger.

A Curry layup would take the lead to 9, and there just wouldn’t be enough time for the Cavs to complete a comeback.

The Golden State Warriors even the series up with a 107-103 victory. 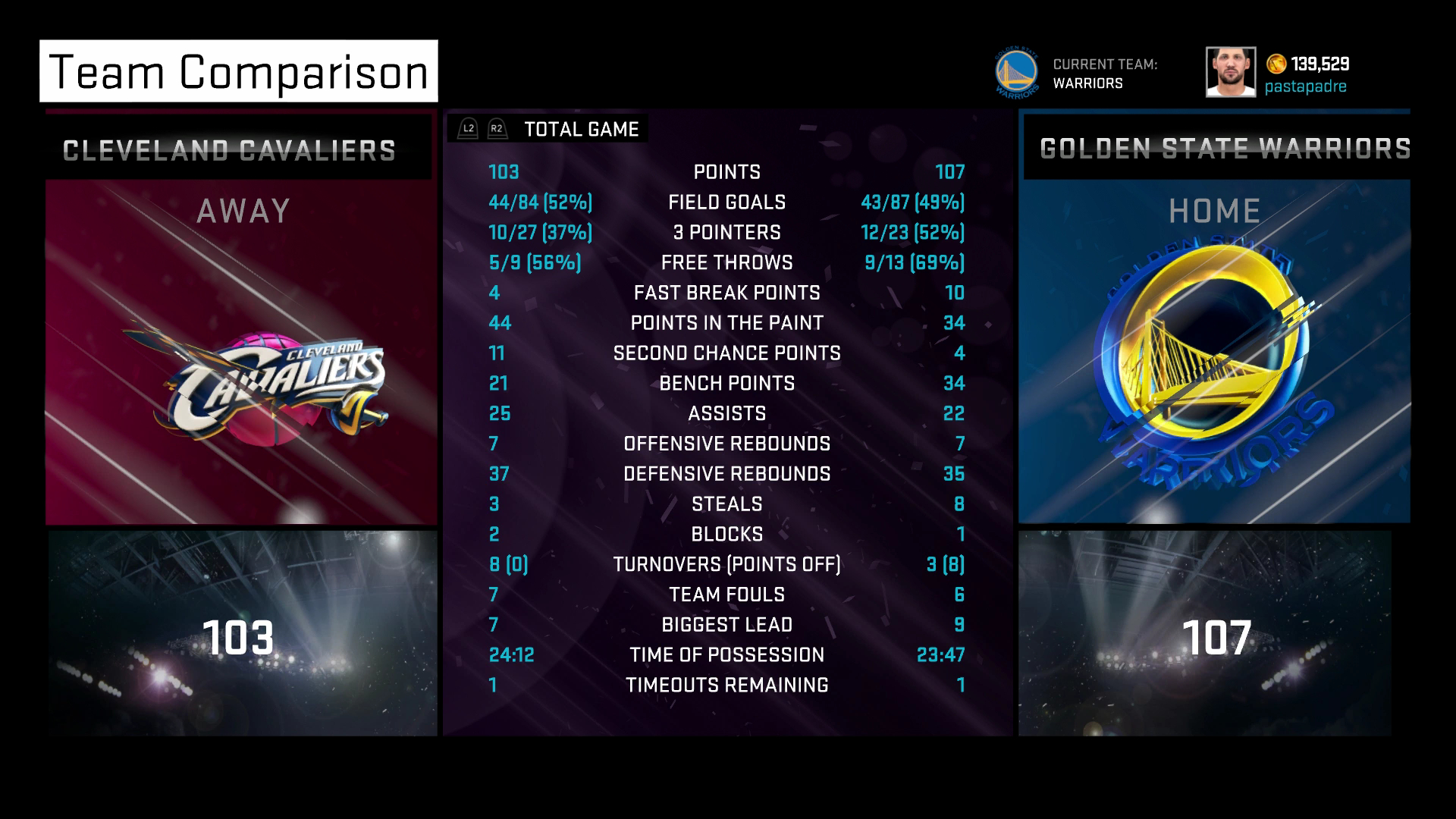 Unlike the last game, one team held an advantage in a number of categories that played a role in the victory. Golden State had in their favor trips to the free throw line, fast break points and bench points, more three-point makes in fewer attempts, more steals, and fewer turnovers.

LeBron was nearly unstoppable, using his physicality to get baskets that only he could make look easy. Poor three point shooting, particularly from Irving missing 8 of them, had a major impact on the outcome.

Rich’s Take: “I love this response by Golden State, from the refs giving the Warriors more trips to the line at home to LeBron continuing to step it up and shine at the biggest moments. The Thompson-Curry combo is deadly right now, but with the way James is playing, I kinda think the Warriors are going to be hard-pressed to get a W in Cleveland.”