Stephen Curry opens game on fire. He opens the game with a three, drains another shortly after, and then gets a three-point play. Curry would score 16 of the first 20 for Golden State.

Later in the quarter Harrison Barnes hits a three to extend lead to 11, and on the very next possession hits another from the exact same spot to make it 14.

The Warriors would hit 6 of their first 7 three-point attempts. Late in the quarter in transition Iman Shumpert gets the dunk as the Cavs try and keep the game from getting out of hand.

The Warriors hold a 33-21 lead after one quarter.

The Cavs aren’t going to be put away that easily though. Only a few minutes into the quarter J.R. Smith hits a three to cut the lead to 4.

LeBron James hits a nice turnaround jumper to keep the deficit at 4.

Just a couple minutes later though and Klay Thompson hits a three to take it back to 10.

The Warriors lead extends to 13, but LeBron hits a floater with contact to try and keep them falling too far behind.

Still Golden State is feeling good, and only a few minutes into the third quarter they’re ahead by 15.

Despite limited minutes Shaun Livingston gets a highlight of his own, knocking down Kryie Irving on his way to a lay-in.

With just 30 seconds left in the quarter Curry hits a three as the shot clock is running out. This came not long after the Cavs started threatening by cutting the lead down to 8.

The Warriors are ahead 85-72 heading into the fourth.

Early in the quarter Curry loses the ball to James who takes it the distance for the huge dunk.

The Warriors don’t score for first four minutes of the quarter, but Cleveland only manages to cut it to 9 in that span. Later Curry finds Andrew Bogut for the score, and an Iguodala steal leads to a Curry lay-in on the break.

The game tightens up though, with 1:46 left and the lead cut to 6, Curry gets the ball to Bogut for the slam.

With things getting dicey, following a turnover and the lead only at 4, Andrew Bogut gets a huge block on an Irving drive and that’s followed by Klay Thompson knocking down a three.

In what looked to be a must-win game Golden State comes through and wins 108-103 squaring the series 2-2. 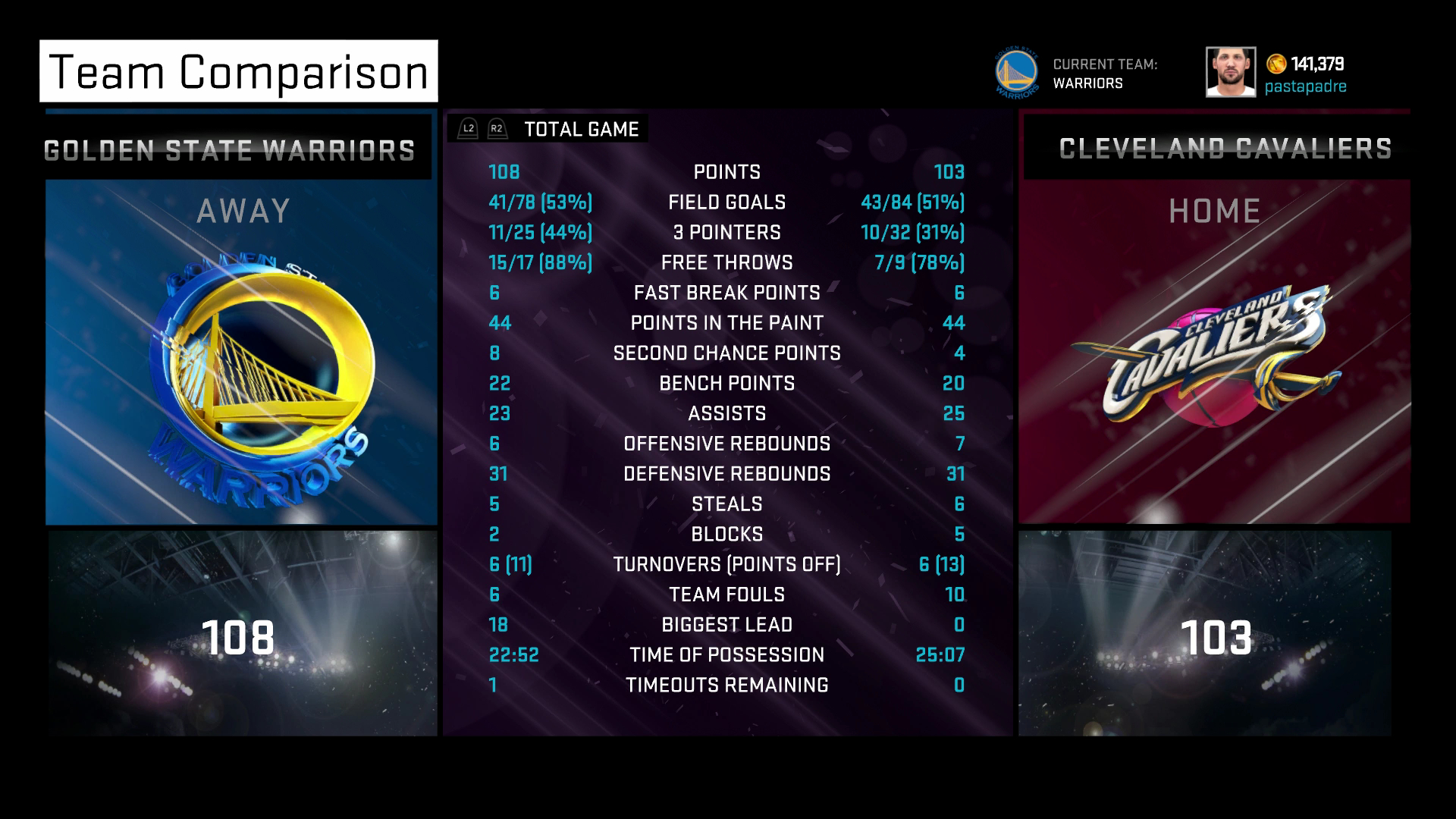 This was easily the best all-around game of the series for the Warriors. They jumped out ahead early and never relented, though the Cavs get credit for giving themselves a chance at the end. Golden State was hot from outside the arc and had a big advantage from the foul line.

An unlikely hero for the Warriors was David Lee. He played only 8 minutes but recorded 12 points and a steal that led to a bucket. That’s huge production especially considering Draymond Green had his third straight disappointing performance.

Rich’s Take: “This is a shocker. After the way they pretty much manhandled Golden State at home in Game 3, it looks like the Cavaliers suffered a letdown. No matter what, you can’t let a team like the Warriors build up that kind of a lead and hope to storm all the way back. If Cleveland loses the series, this is the game they’ll know cost them. If Golden State wins the series, they’ll remember this one as the lynchpin.”