With the series split, game five is critical, and the Cavs have to find a way to win another game at Oracle in order to emerge as Champions. Early on LeBron James has a nice find of Tristan Thompson, who slams it home.

Klay Thompson has a rough start to the game, going just 1-6 in the first 6 minutes as the Cavs jump out to an 18-11 lead. However Stephen Curry brings the team back with two straight buckets following a timeout. This would be the start of a 10-0 run.

A bad pass by Andre Iguodala is intercepted by Iman Shumpert who takes it the distance for an impressive dunk.

The quarter ends with the Warriors leading 29-27.

Early in the quarter Curry spots Iguodala under the hoop for a nice layup.

Timofey Mozgov gets rejects Maurice Speights from behind, and the ball somehow goes the opposite direction out to the three-point line. Eventually though Speights gets bucket off an offensive rebound.

Kyrie Irving hits James who goes backdoor on Draymond Green for the jam.

A back and forth quarter, with lead change after lead change, ends with the Warriors ahead 62-58 at the half.

Curry hits a few open mid-range jumpers and the lead is up to 7. He follows them soon after with a three as the shot clock is running out to take the lead to 8.

Later in the quarter Green gets an offensive rebound off his own miss and drops it to Bogut for the slam.

Iman Shumpert shows off some sweet moves and beats the shot clock buzzer to tie the game up with a 10-2 run by Cleveland. The Warriors are only shooting 33% in the quarter.

The Cavs capture a lead heading into the fourth at 86-82.

Steph Curry starts the quarter off with a three, and soon after gets a three point play to put the Warriors back ahead.

The game would remain tight throughout the fourth, however Curry gets the lead to 6 with this scoop shot.

However the Cavs aren’t going away easy. J.R. Smith hits a three to cut the lead in half. That’s followed by a steal and Kyrie Irving downs the jumper to make the deficit just 1.

The Warriors answer right back with when Curry finds Bogut for the lay-in and he gets fouled and converts the free throw. A turnover on the ensuing Cavs possession then leads to a quick Curry layup and the game was suddenly out of reach. 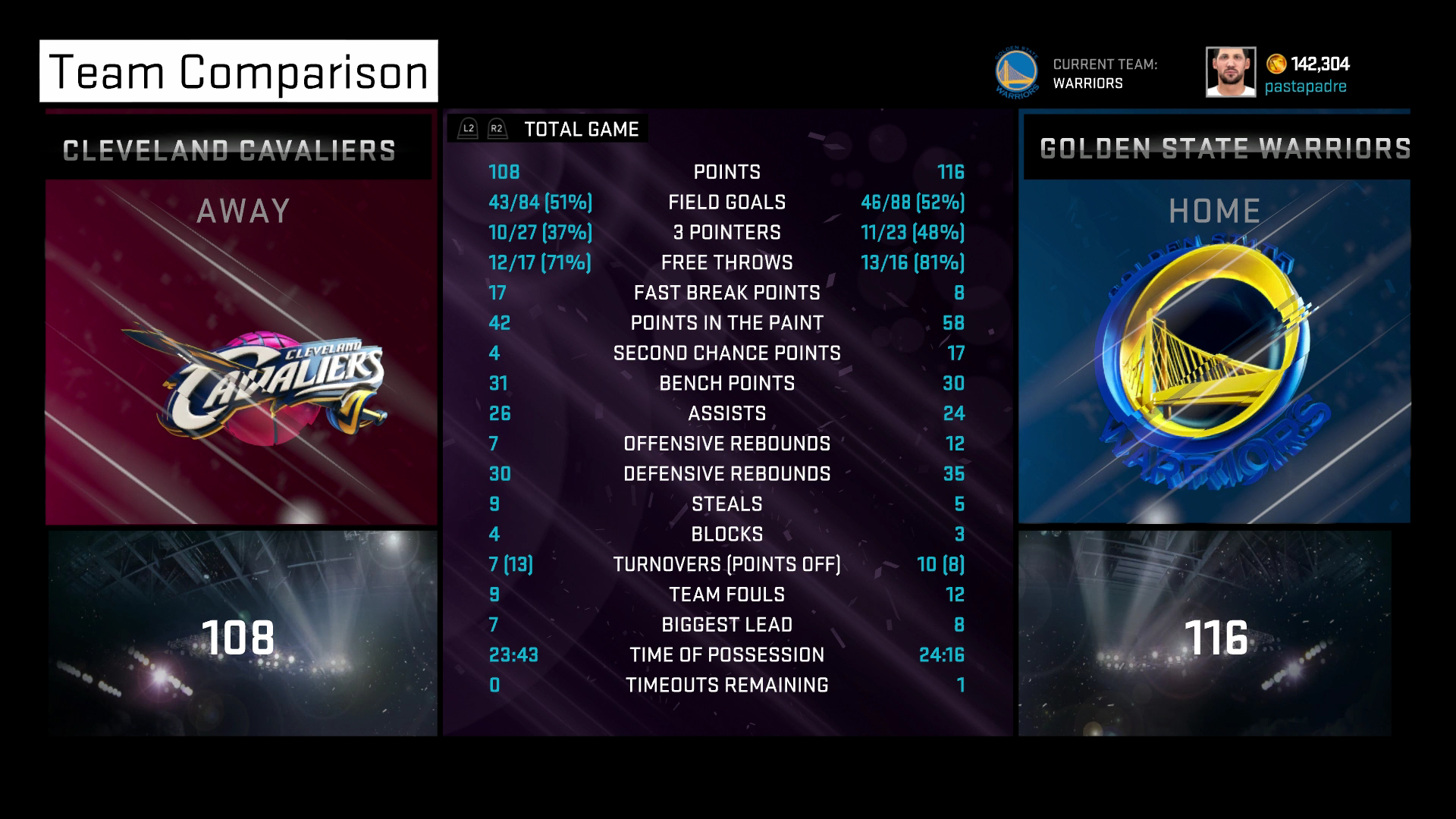 The highest scoring game of the series so far went to the team one would expect to win such a game. This is despite a disappointing performance out of Klay Thompson. If someone had said Thompson would only score 9 points and shoot 20% from the field few would expect Golden State to have won this game.

Kyrie Irving was extremely efficient, he started by making 9 of his first 10 attempts from the field. He picked up for LeBron James who only scored 8 points in the second half. Despite that the Cavs still had a chance to steal the game it just got away from them in the final minute.

Cleveland had an advantage in fast break points but the discrepancy in second chance points is where they lost the game.

Rich’s Take: “I’m stunned, but this game illustrates exactly why Steph Curry is the MVP. He was the best player on the court, took LeBron’s best punch, picked up his team even when their second-best scorer suffered a poor offensive outing, and still led the Warriors to the brink of a championship – on the road! I never saw this coming – although I probably should have.”