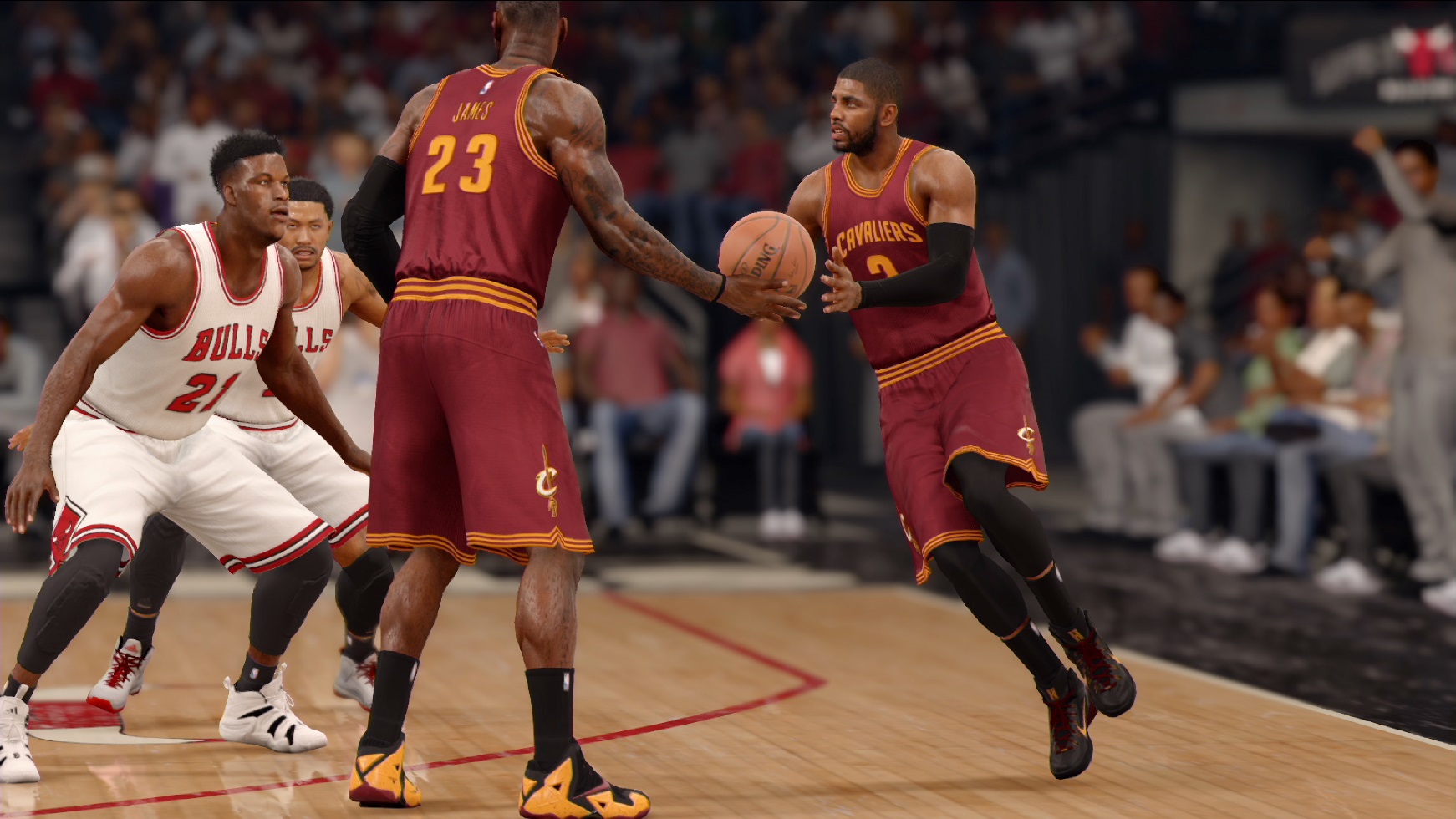 Monday was a big day for Madden NFL 16, which featured a new mode announced in addition to detailed gameplay improvements. “Draft Champions” combines Draft Kings/Fan Duel-style rapid fantasy football, Ultimate Team-inspired online ladders, and traditional head-to-head matchups. Unlike Ultimate Team or Franchise mode, there’s no long term commitment and players are selected through a limited “draft” to shape the teams. Much more was explained regarding how proper penalties have been implemented and what legacy issues in gameplay have been addressed.

I’m always happy to see new things in modern sports games. To me, this is a nifty in-between for people like me, who enjoy the competition of our online leagues but don’t venture into the pay-to-win Ultimate Team arena. I can see certain aspects of this being quite enjoyable, particularly in getting to play as a bunch of different athletes that wouldn’t normally be in my franchise. As with any new mode, I am sure it won’t be perfect on Day 1 – but not only am I willing to give it a try, I’m glad to see the Madden team coming up with interesting ways to play the game. Draft Champions has my attention.

The concept is sound, and similar to that of All-Pro Football 2K8, allowing for gamers to “draft” to strengths but leave open weaknesses. Variety in the online games being played, with unique challenges that have to be faced depending on personnel on both sides, makes it interesting. It falls short of the “fantasy football” spin they’re trying to sell, but it could be fun for those who don’t want to invest time or money in Ultimate Team. This could be the first attempt at developing an eventual Ultimate Team replacement.

The standard fare for FIFA at the pressers, with a new gameplay trailer revealed, and a presentation on stage – but this one was excessive considering it included a sit-down interview with Pelé. As a bonus to those playing FIFA 15 Ultimate Team, Xbox One owners have received free Pelé and Lionel Messi cards, while those on PS4 received only Messi.

EA’s FIFA franchise is the king of the sports game world, and they’re in a challenging spot from an E3 presentation perspective as well as a year-to-year improvement schedule. Making modifications to the core gameplay is always a good idea, but rattling off the list of enhancements – while impressive – will make everyone who’s not a FIFA junkie’s eyes glaze over. Barring the introduction of a new mode, it’s almost better for FIFA reps to hop on stage, say “we’re doing a bunch of great stuff you’ll love on the pitch,” then move on to the next game. FIFA doesn’t need promotion the way other games do, it just needs its fans to feel good about what the development team is doing

FIFA is the highest selling video game worldwide every year, yet it always feels out of place at events such as this one. It was a poorly conceived presentation, but a good trailer, and tons of good gameplay improvements that EA hopes will close the game with Pro Evolution Soccer in that regard. They’ve got the edge everywhere else.

A phone app was announced for scanning faces into the game called “GameFaceHD”. The promise was made for reliable online play with a big feature to be revealed this summer, and the release date was announced for September 29.

This was, undoubtedly, a risky presentation. Livehas dramatically trailed its competitor this generation, and EA came out with bold statements about their stable online play and face-scanning technology – two direct shots at NBA 2K. The approach smacks of either supreme confidence or last-minute desperation. We’ll see in late September which of these turns out to be the case.

This may not have been the best forum to try and sell NBA Live again, but it was probably the strongest of the presentations in terms of content and promise for the upcoming game. EA knows Live has nothing to lose, and if they go down, they’re going to try and do it swinging. Promising amazing online play, when they can’t know for sure how it’ll turn out, is a sign of that.

NHL got the short end of the stick this year, with nothing more than a trailer being shown. Considering EA Sports has attempted to reveal every feature and seemingly every attempt at improving gameplay prior to E3, unless there was something that was being held back, it’s no surprise there wasn’t anything significant left for the presentation.

Fans of the franchise don’t want to hear anything more about NHL, they want to see it. After last year’s poor debut on the PS4 and Xbox One, EA knows this year is all about delivering to the core. They didn’t need to drive that message home any more than they already have, so I’m not surprised NHL 16 was given a brief treatment.

The Xbox One game had a release date of September 15 announced.

I’m much more of a Forza Horizon guy than a Forza “proper” person, but that won’t change the fact that I am all in on Day 1 with Forza 6. Turn 10, the development studio behind the franchise, knows how to make a simulation racer that can appeal to total car casuals like me as well as the gearheads that live for it and Gran Turismo. Forza is also great at implementing social aspects of these games that make you feel like you’re competing with your friends even if they’re not online when you are (which, considering my hectic schedule, is always the case).

Briefly mentioned and shown during the presser, nothing new was announced for McIlroy PGA Tour. Info on a new mode called “Night Club Challenge” is expected today.

I am so ready for a new PGA Tour game, having had the excellent Golf Club prepare me for what true, next-gen, socially-integrated golf can be like. I have no idea whether PGA Tour will deliver on its promises, but it sure does look great in screen shots.

I’ve written about how this series had an identity crisis, losing Tiger Woods, and we’re seeing some of how that’s come into play now. It started with the delay and now word is getting around that this game will disappoint as far as content goes – it’s starting to feel a little like last year and NHL 15. Hopefully it can deliver with gameplay that appeals to a wide audience because if it doesn’t The Golf Club would be the better option.

The most unexpected news on Monday related to contract details that EA avoided confirming for over a year. Finally COO Peter Moore went on record that the deal with the NFL and NFLPA is still an exclusive on consoles, and that any Joe Montana game would be unlicensed if it were to release on consoles.

I have enjoyed Madden for years, but even if it were an absolutely perfect game, having no licensed competition in the space remains a tough pill to swallow. It’s a brilliant business decision – prevent anyone from making a football game for consoles or PC with the real NFL team, players, and stadiums – because not only does it shut out competitors for a season, the cumulative effect of nearly a decade of no one building AAA-worthy football makes the barrier to entry too enormous for anyone to bear. As a fan of sports games, though, I’d like to see all exclusive licenses disappear forever.

This should have been made official last year, but EA dodged the question at every turn, leading to suspicion that something to do with the terms of the deal had changed. Now that it’s resolved, we know that no other football game can be NFL or NFLPA licensed on any console. That was also the case with PC originally, but there’s no word on whether that has changed since. Licensed games can still be made for mobile devices.

Despite teases suggesting news would be announced, and rumors claiming all sorts of fantasy scenarios, Joe Montana Football 16 was a complete no-show at all press conferences. Some news still could emerge over the next few days but it won’t have the prominent reveal many were hoping to see.

I feel badly for the community that so desperately wants this game to exist. Whether or not a true, profitable market is there for a competitor to Madden – or if that community is simply a small but vocal one – remains to be seen. The strange, cryptic messaging being put forth by Damon Grow, ostensibly the creative vision behind whatever this game is supposed to be, is not helping anyone. It’s time for this game to be properly announced or disappear.

An unlicensed football game was never going to make the stage at one of the press briefings. That shouldn’t have been a surprise, except for fake rumors that gained traction and had people believing otherwise. Support the idea of new games, and don’t create a fantasy of something that doesn’t exist, until the day it does!

Though not necessarily sports related, both of these could end up being of interest to those who enjoy the games. The “Elite” wireless controller supposedly will be sold for $150 and offer a great deal of customization options plus new paddles under the grips and rolling pad replacing the D-Pad. Backwards compatibility was announced but the titles available now and through the fall will be limited. No sports games are among the initial group.

While this has zero appeal to me personally – I haven’t bought a peripheral of any kind for any of my consoles ever – it’s clear that there is a market for specialty controllers for dedicated fans. More choices are always better, and if you’ve got the money and the desire, it’s good to have options.

Being able to customize the controller could have been big for hardcore sports gamers, but at $150 forget it. Unfortunately I don’t see backwards compatibility affecting the sports games people would want back like NCAA Football 14, College Hoops 2K8, or NBA 2K11. Licensing issues, and internal debates about how it might affect sales of upcoming or currently available games, makes them unlikely to be made available.