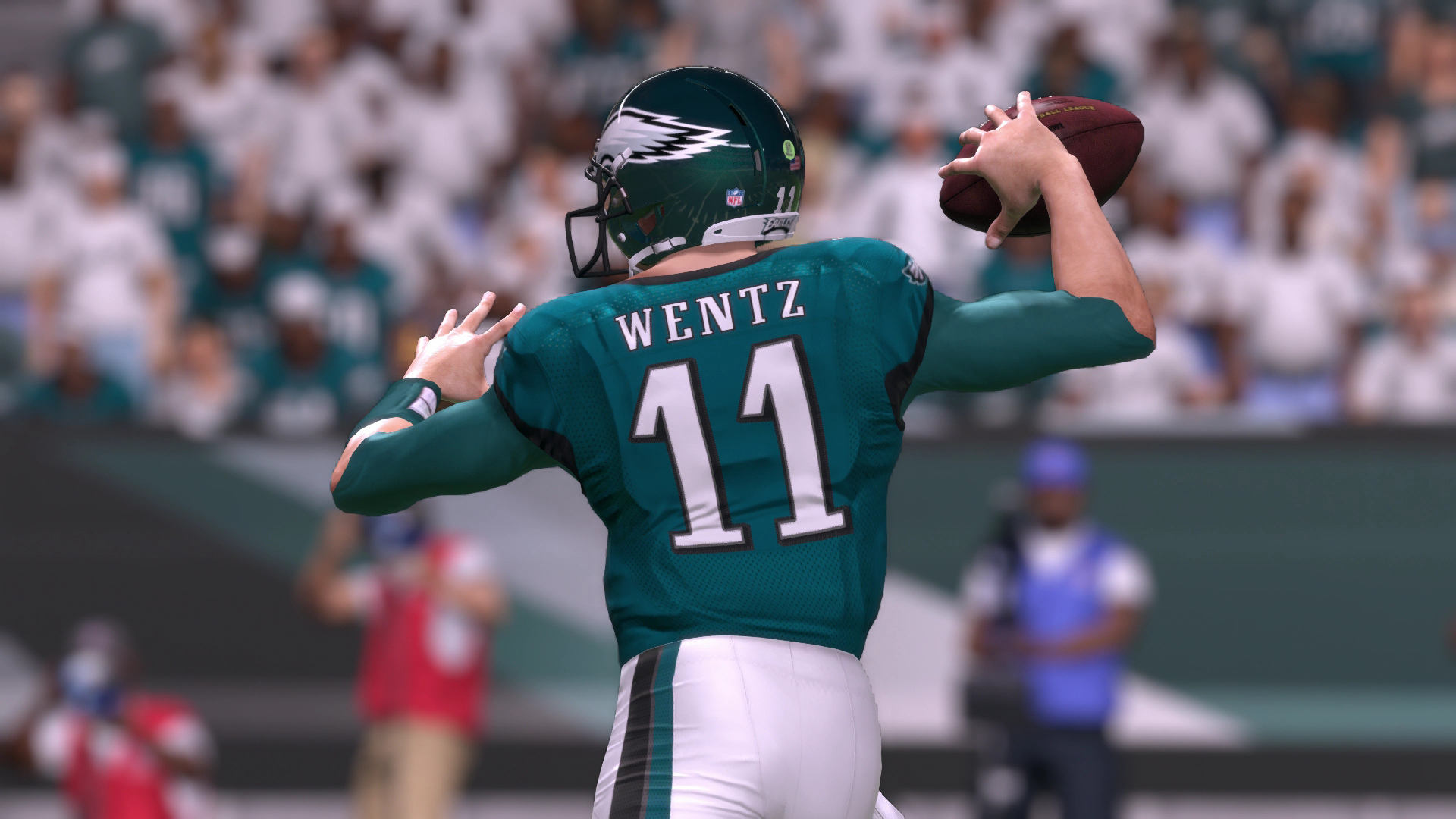 Grading the first round of the draft for Madden NFL 17

The effectiveness of rookies in the Madden NFL franchise is not necessarily linked to their draft positioning or even their Overall Rating. The position they play, specific attributes, and the opportunity they’ll have to perform and earn ratings upgrades over the course of the season all play a huge role in whether they’ll have a major impact or none at all in the upcoming video game.

With that in mind, how did teams do in terms of Madden NFL 17 with their first round draft picks?

#1 Los Angeles Rams: Jared Goff, QB, California
Grade: B
Goff is the most NFL-ready QB, he’ll have the highest ratings of the rookies at the position, and will be on the field from the first game on which creates the potential for him to benefit from roster updates by performing well.

#2 Philadelphia Eagles: Carson Wentz, QB, North Dakota State
Grade: C
While he may end up being a good long-term solution at the position for the Eagles, and he has the potential to be a franchise QB, he isn’t going to be much help in year one. He’ll likely be rated below and sitting behind Sam Bradford, so he won’t have a chance to improve his stats, but he’ll still be an intriguing choice to roll with and develop in Franchise Mode.

#3 San Diego Chargers: Joey Bosa, DE, Ohio State
Grade: C
The choice of Bosa was a curious and unexpected one. He doesn’t appear to be an ideal fit for the 3-4 defense San Diego runs, and his 40 time translating to a relatively slow Speed Rating will hamper his effectiveness on the field in Madden.

#4 Dallas Cowboys: Ezekiel Elliott, RB, Ohio State
Grade: A
The Cowboys snagged the player that will likely be the highest impact in the draft for Madden. Not only would he be the odds-on favorite as the highest rated rookie, but running back may very well be the position that best translates for rookies, as they can produce as long as they get touches. Getting to rush behind the excellent offensive line in Dallas only makes his breakout potential even greater.

#5 Jacksonville Jaguars: Jalen Ramsey, CB, Florida State
Grade: A
There’s no more valuable commodity in Madden than a shutdown corner as the CPU is controlling them for the majority or entirety of a play, often while they’re in a sense left on an island. Ramsey is the top corner in the draft but also could convert to safety down the line, and his physical play and size will be critical for stopping big receivers in the video game.

#6 Baltimore Ravens: Ronnie Stanley, OT, Notre Dame
Grade: B
Offensive line or pass rush were areas where the Ravens were sure to focus and they got one of the top offensive tackles in the draft in Stanley, having decided to pass on Laremy Tunsil who is expected to come in rated higher but had other considerations that caused him to fall. Offensive line isn’t generally where impact players are found in rookie seasons – they can be steady but don’t get a whole lot of attention in roster updates and are hard to progress in Franchise. Still it’s a need which had to be filled.

#7 San Francisco 49ers: DeForest Bucker, DE, Oregon
Grade: B
Unlike Bosa taken earlier, Buckner is an ideal fit for the 3-4, and will deliver the pass rush the 49ers are looking for out of a top defensive talent.

#8 Tennessee Titans: Jack Conklin, OT, Michigan State
Grade: B
The Titans moved down from the top spot to 15, then back up to 8 in order to take a much-needed right tackle. Conklin fits the mold well, but again the fall of Tunsil meant possibly getting a player not quite as well-regarded as they had first anticipated they would be able to select.

#9 Chicago Bears: Leonard Floyd, OLB, Georgia
Grade: B
Floyd is a good fit as a pass rusher in the 3-4 and his athleticism ratings will make him a dynamic player to have on the field that can be expected to make big plays.

#10 New York Giants: Eli Apple, CB, Ohio State
Grade: B
Apple offers up the physical skill set and play style that is important in Madden, but he may not represent much of an immediate upgrade – there were other positions where the Giants could have made a bigger splash for the video game.

#11 Tampa Bay Buccaneers: Vernon Hargreaves III
Grade: B
It’s no surprise that corner is a popular pick in the first round (most teams are looking for more) and Hargreaves appears to have the right make-up to play across from Brent Grimes.

#12 New Orleans Saints: Sheldon Rankins, DT, Louisville
Grade: B
The Saints desperately needed help on defense – at every position – and Rankins will provide pass rush from the interior of the defensive line.

#13 Miami Dolphins: Laremy Tunsil, OT, Ole Miss
Grade: A
It was a fascinating journey on draft night for Tunsil, and one that may not be over with yet even, but the Dolphins get a talent the caliber of a top pick and in Madden there are no concerns to be had about character or off-the-field issues.

#14 Oakland Raiders: Karl Joseph, S, West Virginia
Grade: C
Joseph will be joining an up-and-coming team with the hope that he can fill the role vacated by the retired Charles Woodson. Safety however is one of the least critical on the field in Madden, and his ratings will be affected early-on by low Awareness and Play Recognition, and possibly low Injury after coming off a year in which he only played four games due to an ACL tear. That could make him one of the least impactful first round rookies to begin the season, but with the potential to improve from there.

#15 Cleveland Browns: Corey Coleman, WR, Baylor
Grade: A
As one of the several players mocked correctly in the piece looking at who would be the ideal selections for each team when considering Madden, Coleman is the type of receiver that can high-point the football (even without being tall) and he has the speed to be dynamic in the open field.

#16 Detroit Lions: Taylor Decker, OT, Ohio State
Grade: C
With Madden in mind wide receiver would have been the best choice, but the Lions do fill a need with Decker, however he isn’t going to be rated much higher than replacement level at the position and the hope would be to do better than that in the middle of the first round.

#17 Atlanta Falcons: Keanu Neal, S, Florida
Grade: B
The interesting thing about Neal is the Falcons may choose to move him to linebacker. He’s fast and hits hard, so he’ll be a good addition regardless of position.

#18 Indianapolis Colts: Ryan Kelly, C, Alabama
Grade: A
There was little doubt Indy would go offensive line here, and they’re getting the top interior guy in Kelly who can anchor the line for years to come. He’ll likely be one of the top 10 rated rookies in the class.

#19 Buffalo Bills: Shaq Lawson, DE, Clemson
Grade: B
Pass rush was a big need for the Bills, and though defensive ends sometimes struggle with production as rookies Lawson was a no-brainer at this pick.

#20 New York Jets: Darron Lee, OLB, Ohio State
Grade: B
Lee fills a need as an immediate upgrade, while other positions like QB that need to be addressed wouldn’t have been fixed here.

#21 Houston Texans: Will Fuller, WR, Notre Dame
Grade: A
The fourth pick out of the last seven that matched the mock, Fuller is the type of speed wide receiver that will perfectly complement DeAndre Hopkins for Madden.

#22 Washington Redskins: Josh Doctson, WR, TCU
Grade: A
It could be argued that Washington neglected the defense that they really need to improve, but Doctson is a talent that gives them an “Aggressive Catch” receiver and another red zone threat.

#23 Minnesota Vikings: Laquon Treadwell, WR, Ole Miss
Grade: B
While he may be slower than the others taken, Treadwell is a good possession-style receiver than can win 50/50 balls.

#24 Cincinnati Bengals: William Jackson III, CB, Houston
Grade: B
Though a need the Bengals really could have used an impact receiver, but they were all off the board, so corner made sense and they went with a fast cover guy which is always helpful to have on the field.

#25 Pittsburgh Steelers: Artie Burns, CB, Miami
Grade: B
It seemed obvious Pittsburgh would be taking a corner at their selection, and they did with Burns, who may not be rated like a first rounder but will have the potential to grow.

#26 Denver Broncos: Paxton Lynch, QB, Memphis
Grade: B
John Elway made a move up to grab Lynch, who is talented but will probably need some time on the sidelines before taking the reigns. That means Mark Sanchez looks to be the starter for now, but gamers can make the move to Lynch immediately and probably have success with him.

#27 Green Bay Packers: Kenny Clark, DT, UCLA
Grade: B
A big interior presence at nose tackle, Clark will be solid against both the run and the pass.

#28 San Francisco 49ers: Joshua Garnett, G, Stanford
Grade: C
A guard will never be very exciting as a first round pick but a good one can still prove to be solid despite not being anything spectacular for the game. The 49ers moved up though to get Garnett who most thought would still have been there when they came back around in the second round.

#29 Arizona Cardinals: Robert Nkemdiche, DE, Ole Miss
Grade: B
While Nkemdiche has off-the-field issues and concerns over effort on the field and dedication to football, none of that really matters in Madden. He’s got the potential to grow into a great pass rusher.

#30 Carolina Panthers: Vernon Butler, DT, Louisiana Tech
Grade: D
Though he undoubtedly has the potential to become a very good defensive tackle (this grade is not an indictment on him) the Panthers already have two fantastic players at the position in Kawann Short and Star Lotulelei so he won’t be on the field enough to make an impact. The thinking for Carolina may be that he’ll take the place of one in 2017, but that doesn’t mean much for now, when corner and offensive line were more pressing needs to address.

#31 Seattle Seahawks: Germain Ifedi, OT, Texas A&M
Grade: B
While this could have been a luxury pick with someone like Myles Jack, the Seahawks finally decided to address the offensive line, taking the mauler type that they favor for right tackle.

The New England Patriots (lost due to Deflategate) and Kansas City Chiefs (traded out) did not make a pick in the first round.