For as good as NBA 2K16 has been since its release three weeks ago, there was one mode in the game that didn’t work until a patch could make it out. The 2K Pro-Am mode, a new addition for this year’s game, is finally functional on PlayStation 4 and will be on Xbox One in the coming days.

Many are likely unaware of the ability to team-up with friends and use custom courts and uniforms. With that in mind we wanted to provide a rundown of the procedures involved.

While the “walk-on” portion of Pro-Am – where you would play as an individual with other random teammates and opponents – is accessible from the main menu, the “play as a team” aspect of the mode is actually found in MyCareer.

The hub area in MyCareer this year is called MyCourt. This is where friends gather to shoot-around, play pick-up games against each other, or load into Pro-Am as a team. The patch has fixed problems that prevented people from joining one another’s courts.

All participants need to join the same court and that’s done by one hitting O/B to bring up the 2K Nav and selecting the “Play with Friends” option. From there people can be invited to the court. At least three need to be involved to join as a team, with any empty spots being filled by CPU.

But before all that, a court and uniforms should be created for the team! This is accomplished through the same area in the 2K Nav. The “Design Arena” and “Design Uniform” options are under 2K Pro-Am.

It’s a fairly simple process but the results can be outstanding. First you’ll want to upload some logos to NBA2K.com with the proper aspect ratios. You can also scroll through and use logos others have uploaded from within the game. There are “Team Logos” which can be placed on the court and on the uniforms, “Arena Logos” which go on the court, and “Scorer’s Table” which are all the advertisements that get rotated through.

Back in the game is where all the design takes place. For the arena there are options for floor type, colors, text, and logos. It’s more than that however as you can change the arena type, jumbotron, seating color, baskets, and even select what sound effects are played when specific events occur. 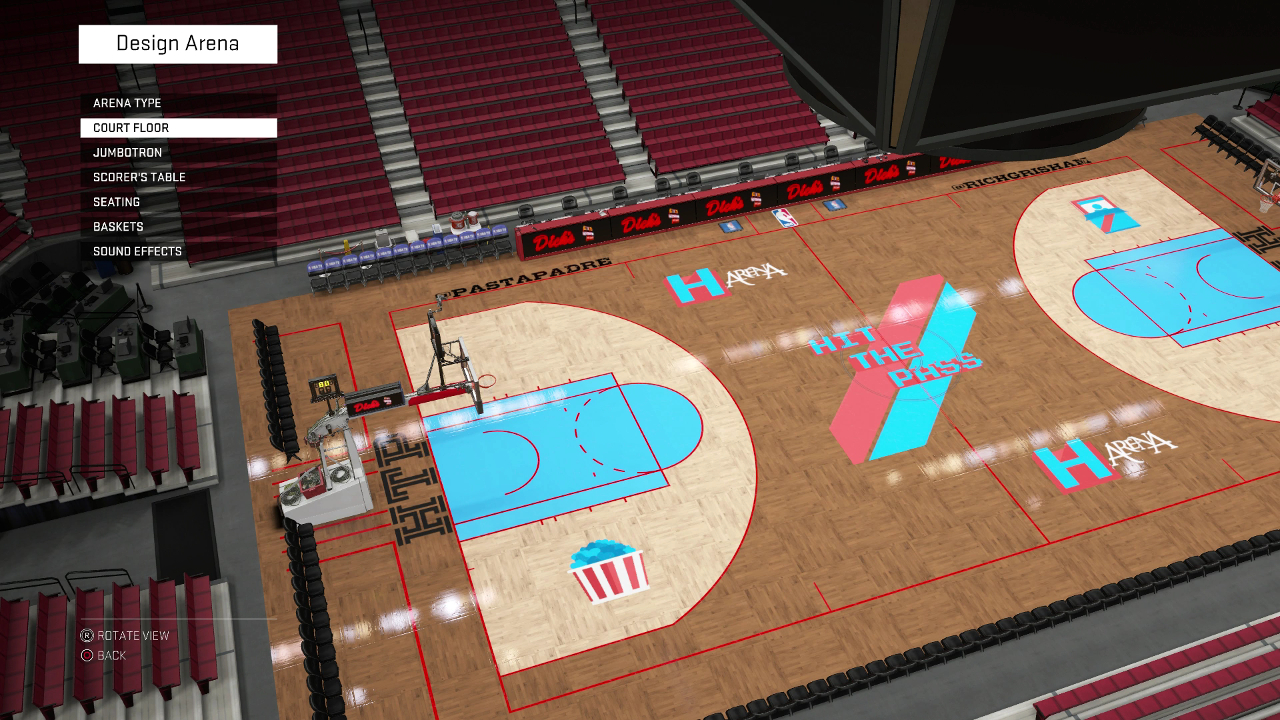 For the uniforms there are all sorts of presets to choose from but you can also start from scratch. There are a ton of options available to make unique designs, or replicate real-life ones, all the while pulling in any logos uploaded to the website.

So there you have it! When starting up a Pro-Am game as a team it’s random whether you’ll be the home team and playing in your arena or on the road in the opponent’s. Look for more on NBA 2K16’s Pro-Am mode in the coming days as we play some games as a Hit The Pass team and post videos with commentary!