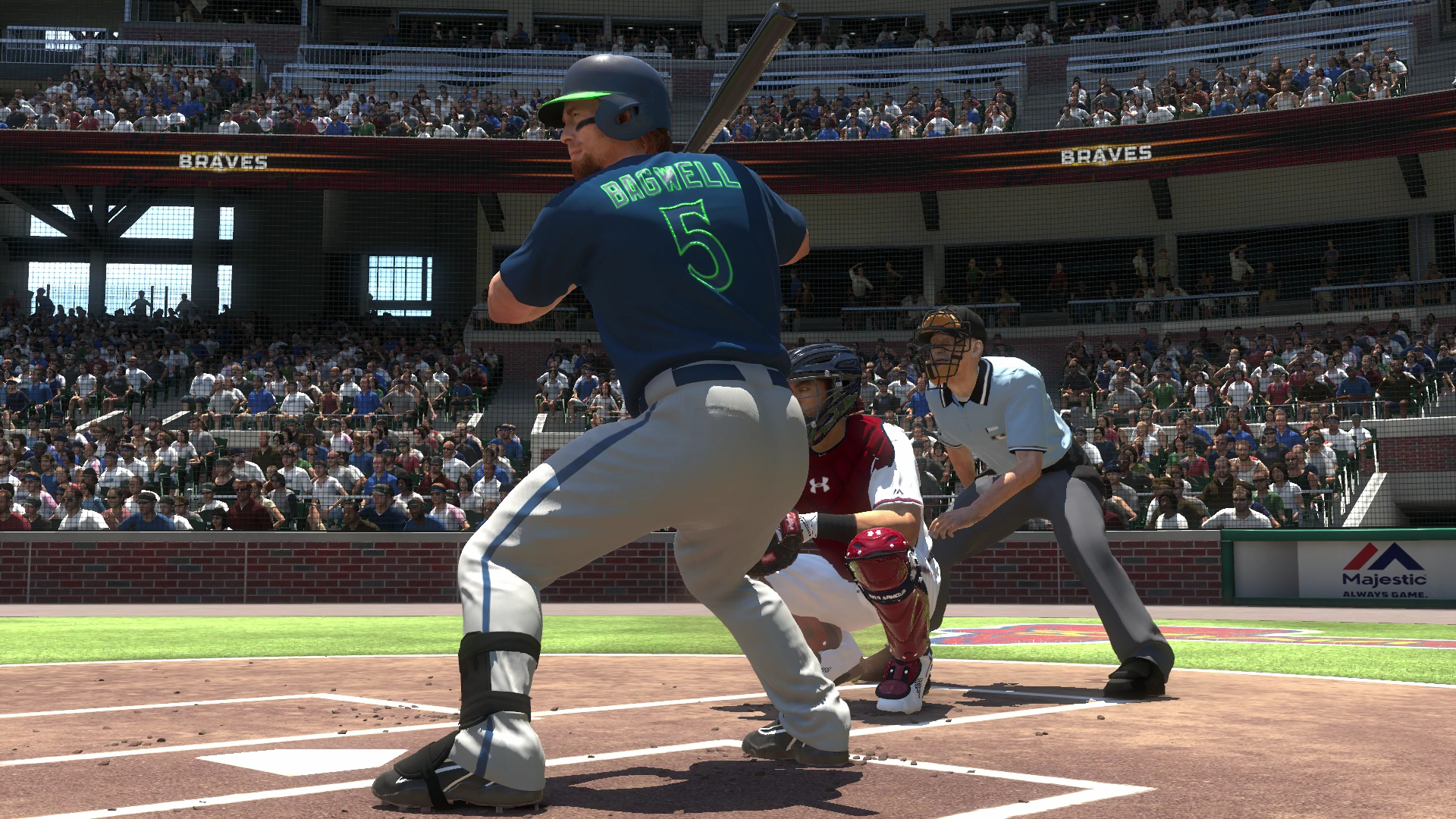 In baseball video games, maybe more than those for any other sport, certain players find their way into the hearts of those who control them due to an unusual level of success or are damned away for an inability to meet their potential. For now lets focus now on the former with a look at the best performers so far this year – all easily obtainable – in a series featuring contributions from several Diamond Dynasty experts.

My Diamond Dynasty offensive star so far has been Rookie Jeff Bagwell – there’s no player I trust more at the plate on my roster right now. He seems to square up everything, consistently making solid contact and driving the ball due in part to a quick compact swing. Whether it’s for a home run, into the gap for doubles, or hard hits through the infield, Bagwell has been by far the most productive offensive player on my team and he’s done it consistently since day one. 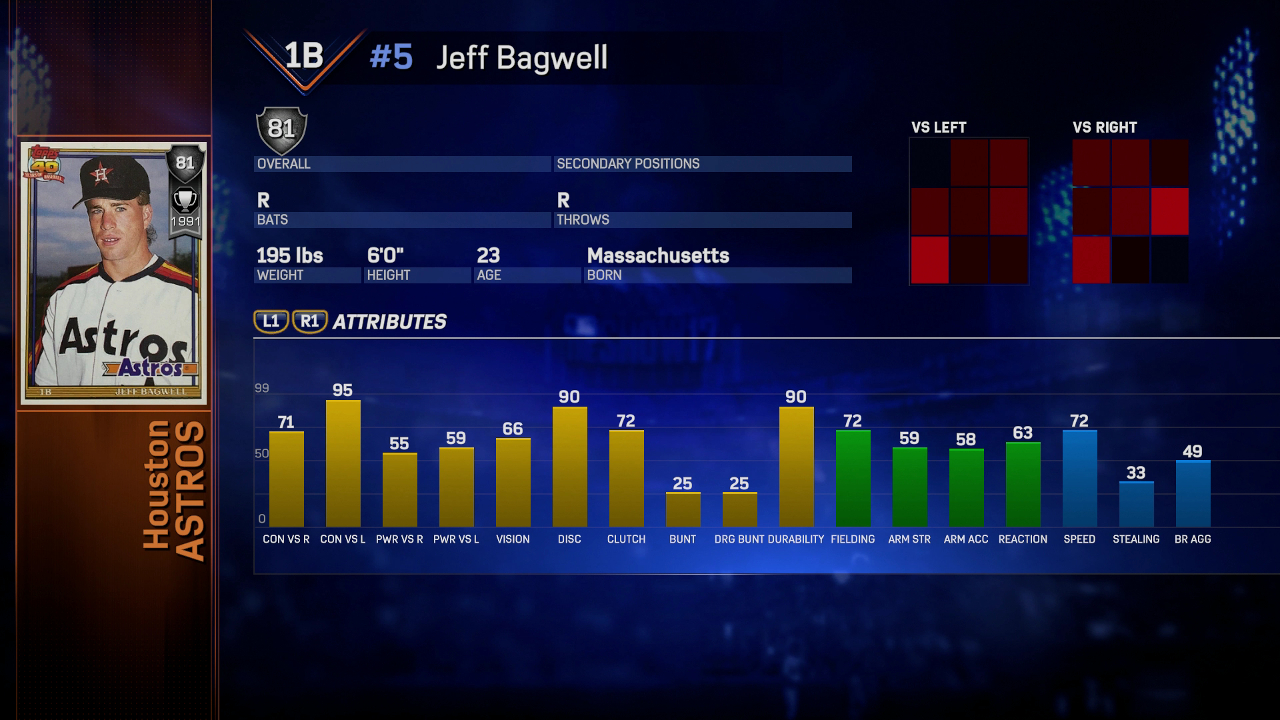 That’s demonstrated well through the statistics where Bagwell leads all of my players used lifetime (min. 40 at bats) in Average, On-Base Percentage, and Slugging. His average of .443 stands out even more given that .309 is the next highest on the team. Bagwell’s .885 SLG% is over 100 points higher than second place. In 93 plate appearances he has 8 HR, 9 2B, and 19 RBI.

The remarkable Slugging Percentage is especially surprising because of his relatively low Power numbers (59 vs lefties and 55 vs righties). One might expect a high average due to the good Contact Ratings but not all the extra base hits. His efforts at the plate have been aided by a decent Speed Rating of 72 and he’s even swiped a few bags for me as well.

The rookie version of Jeff Bagwell checks in at 81 Overall and can be purchased on the Marketplace in the range of 2,000 Stubs.

The MVP Edition of MLB 17 came with a “Gold Starter” pack, and if you happen to have the rookie version of Pederson getting 40 hits with him will unlock a Gold player. It’ll take some time to get those hits given his Contact Ratings are in the low 30’s but don’t let that discourage you from using him. If you need someone who can hit a home run to generate some offense he’s a great option for the lineup or as a pinch hitter. He leads my team in home runs with 16 including this mammoth 515 footer. The home runs account for over half of his 31 total hits so far in 108 ABs.

If you don’t have Pederson an alternative would be Rookie Greg Bird. He has 94 Power vs righties and 62 against lefties with much better Contact Ratings than Pederson. He won’t even cost you 300 Stubs and could find a place on most rosters early in the building process.

It’s a little more difficult to find a starting pitcher that stands out from the pack because of the random pitcher selection that seems to trend heavier towards the top of the rotation this year in my experience so far. However the ace of the Braves’ staff is a great option for the back of a Diamond Dynasty rotation. 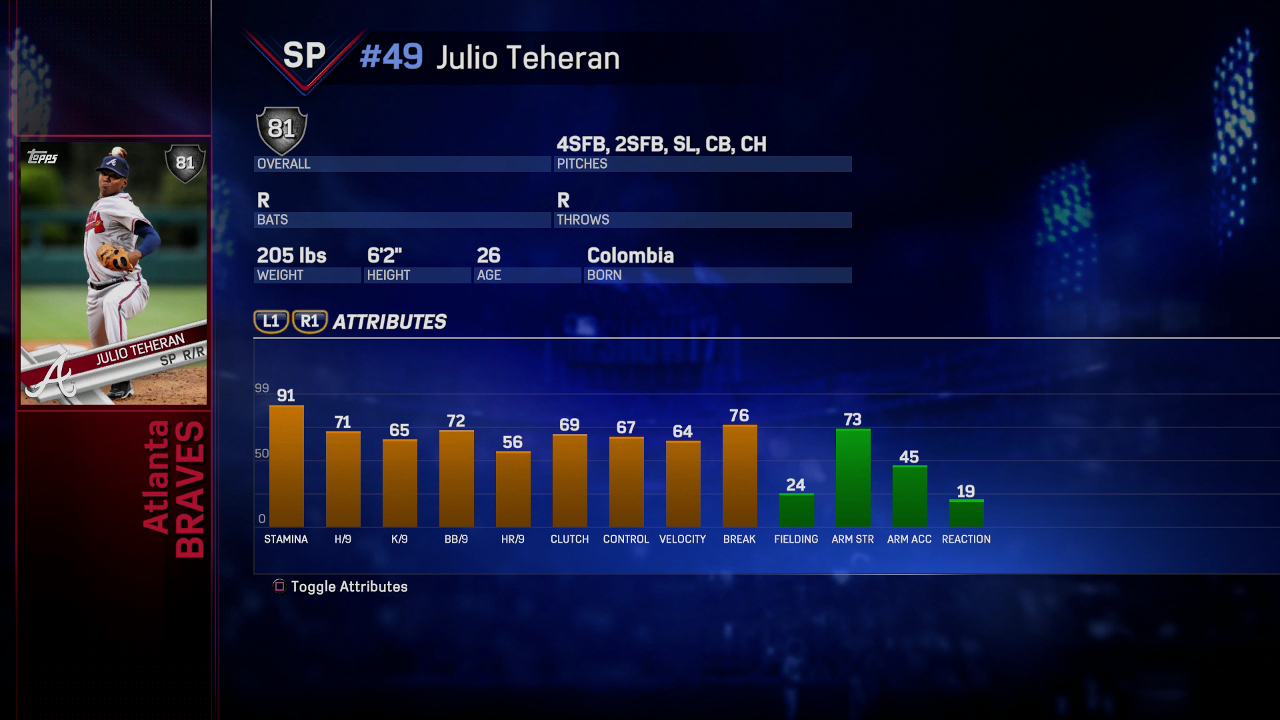 At 81 Overall he’s 7-1 in his 8 starts, with a 2.17 ERA and 1.07 WHIP while striking out over a batter an inning. He’s got respectable ratings across the board, 5 pitches in his arsenal, and a smooth motion that makes timing the pitch release easier. Can’t ask for much more out of 200 or so Stubs.

The Mariners’ closer is doing what Kelvin Herrera did for me last year in MLB 16 and closing the door shut on games both offline and online. He is 21/22 in save opportunities with a 3-0 record in 24 appearances posting a 1.01 ERA, .52 WHIP., with 15 strikeouts per 9 innings pitched. 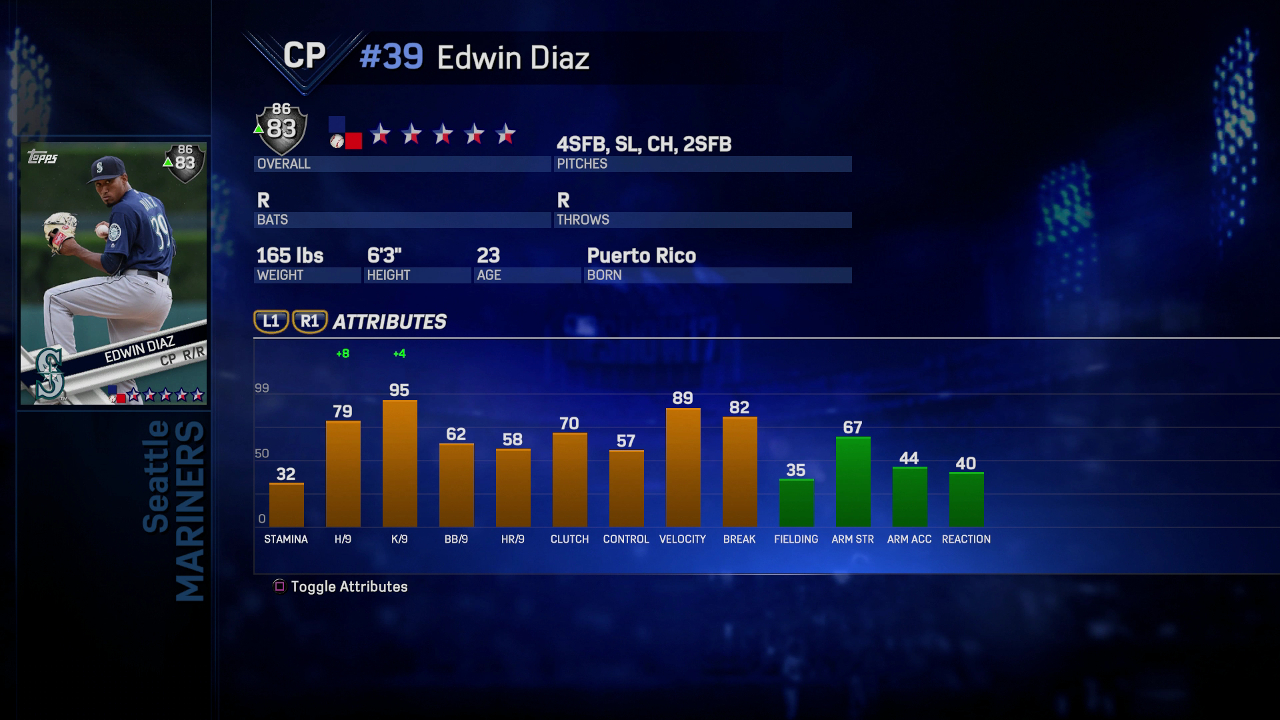 While he doesn’t quite have the 100+mph fastball that he should – he tops out at 98/99 – that power combined with a great slider makes him near unhittable. Throw in an occasional changeup to really keep the batters off-balance. His K/9 Rating is often bumped from 95 to 99 thanks to the daily Inside Edge updates.

There are a few pitchers in the same price range (300-500 Stubs) as Diaz with higher H/9 Rating but none have been near as effective. You can also work fast with Diaz, and getting into a rhythm tends to help me a lot especially in those high-leverage situations.

In 15 innings Robertson has yet to give up a single run. The knuckle-curve is one of the best pitches in The Show and he’s got a good one, plus a cutter that can be especially effective against lefties. He can be purchased for under 300 Stubs.