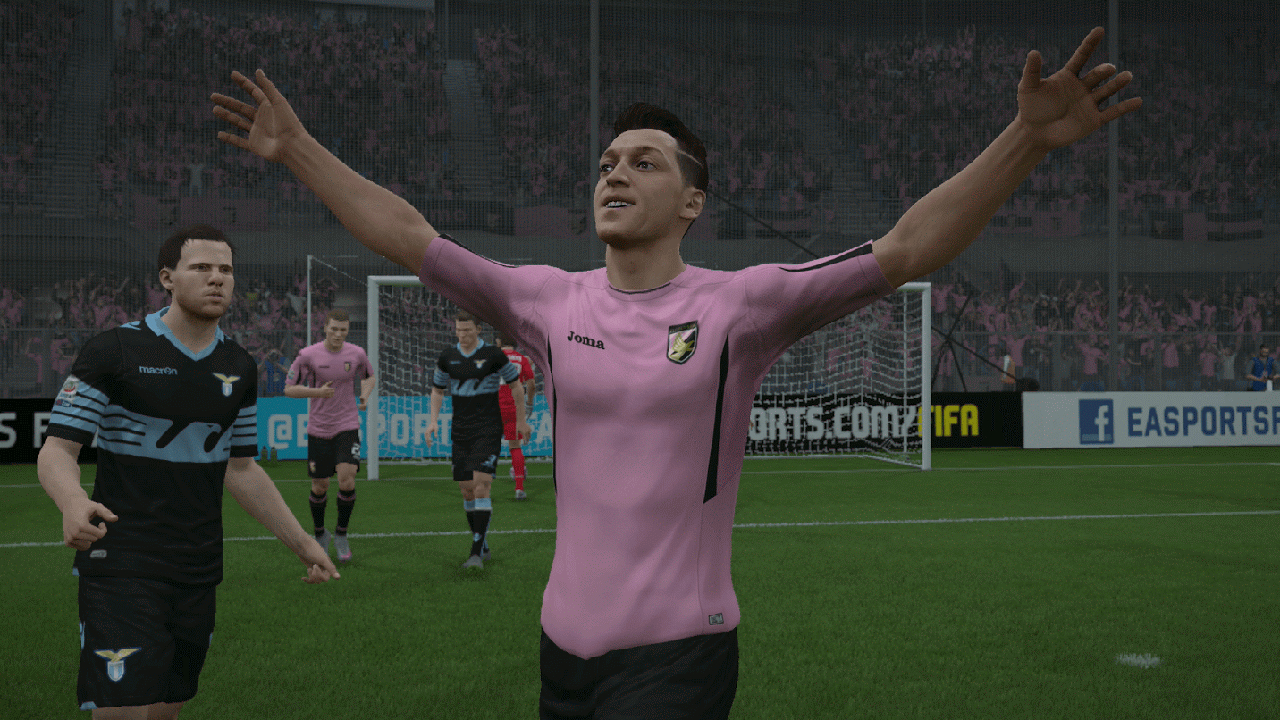 The FUTTIES 2016: Nominees and Picks for the FIFA 16 Ultimate Team Awards

It’s that awkward time of the year when EA Sports has to find a way to engage players during the dog days of summer when the FIFA series is at its least played. Opening day is more than a month away, the new release of FIFA is two months away, and there isn’t much incentive to log-in and play Ultimate Team right now.

The creme de la creme of FUT sets has already been released with Team of the Season so how else can they peak the interest of gamers? Currently the only new cards being released are the dreary Team of the Week sets consisting of players from the weaker leagues who play in the summer (Major League Soccer, Liga Mexico and Brazil). For those into that, great, but the majority would be hard-pressed spending money hunting down MLS In-Form cards.

EA Sports has a mid-summer Ultimate Team set released annually known as the FUTTIES. Essentially votes are cast to recognize the community’s favorite players in the game and reward them with special In-Form cards. This year there are 11 distinct award categories in which fans will vote for their choice of four nominees. The winning players will get a special edition pink FUTTIES card with boosted stats. Last year I was fortunate to snag the winning 90-rated Edinson Cavani so the bar is set high for this go around.

Voting is being from July 22-27 with votes cast through the EA Sports website. The winners of the FUTTIES Awards will be announced on July 29. The winning cards will be available in packs starting that day and will remain available for seven additional days.

Right now all the nominee cards are currently in packs with base level stats (same as their original gold cards) so if you do happen to luck out and snag one what’ll happen is the winning cards will then get an automatic boost and a gold trim on their pink card signifying therecognition. The other cards will remain as pink nominee cards which are the same as the base cards.

Let’s get down to it! Here are the nominees for the FIFA 16 FUTTIES awards and my picks for the winners!

In FIFA Ultimate Team sometimes the only thing that can save you when your defense is breaking down is your goalkeeper or the FIFA gods. Over the years there hasn’t been one I’ve trusted more than Hugo Lloris. His reflexes, positioning and agility are second to none. He was also last year’s winner of “The Safe Hands” and rightfully so. Nothing against the other three nominees but this is comparing steak to hamburger. He hasn’t received an In-Form card this year so let’s give him his proper recognition. Lloris’ Premier League and French national attributes make him for an easy chemistry plug for a variety of FUT squads. 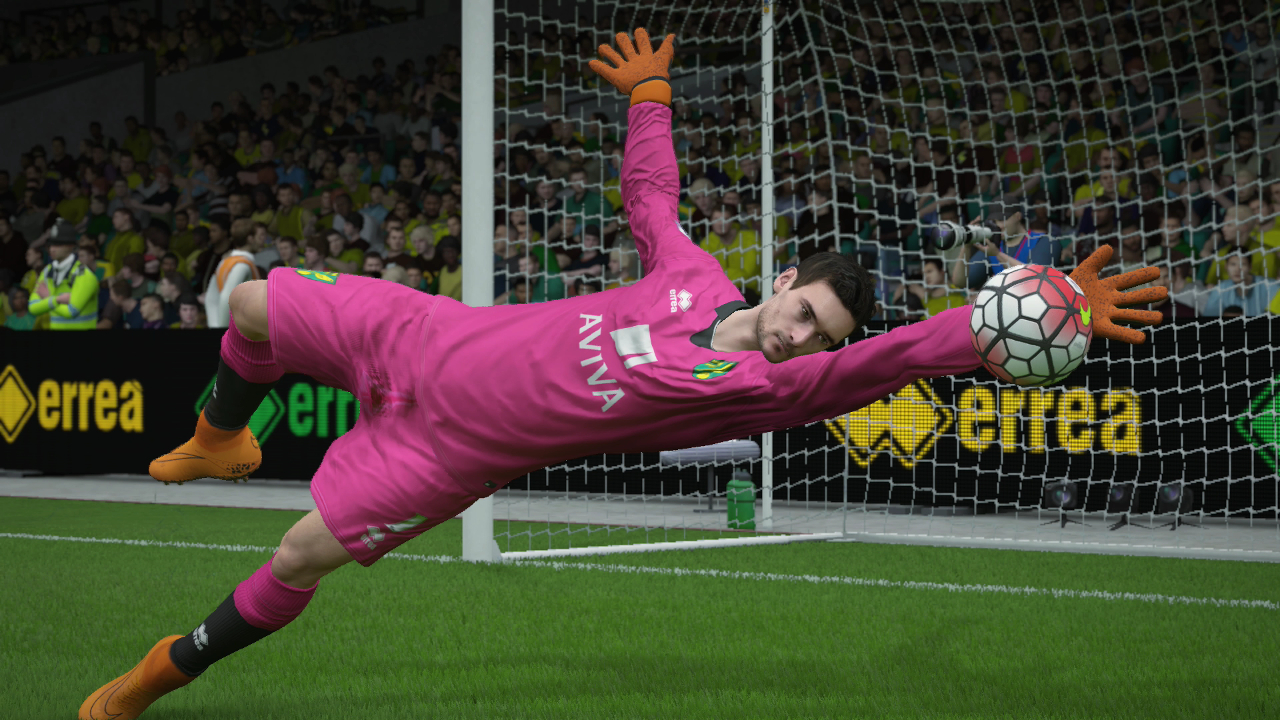 GET STUCK IN / BEST TACKLER

If the award was intended to go to the most vicious, reckless tackler in the game then Nigel De Jong would be the Pele of this category. De Jong is as fierce and controversial as you can be in soccer. Google ‘Nigel De Jong and Xabi Alonso’ if you don’t believe me. Anyways, my vote goes to Sami Khedira the former Real Madrid and current Juventus midfielder who’s an exceptional defensive holding mid. Khedira is one of those multi-functional players who can do a multitude of tasks on the pitch and acts as a 5th defender. He’s arguably the best CDM in the game and he should be honored as such. 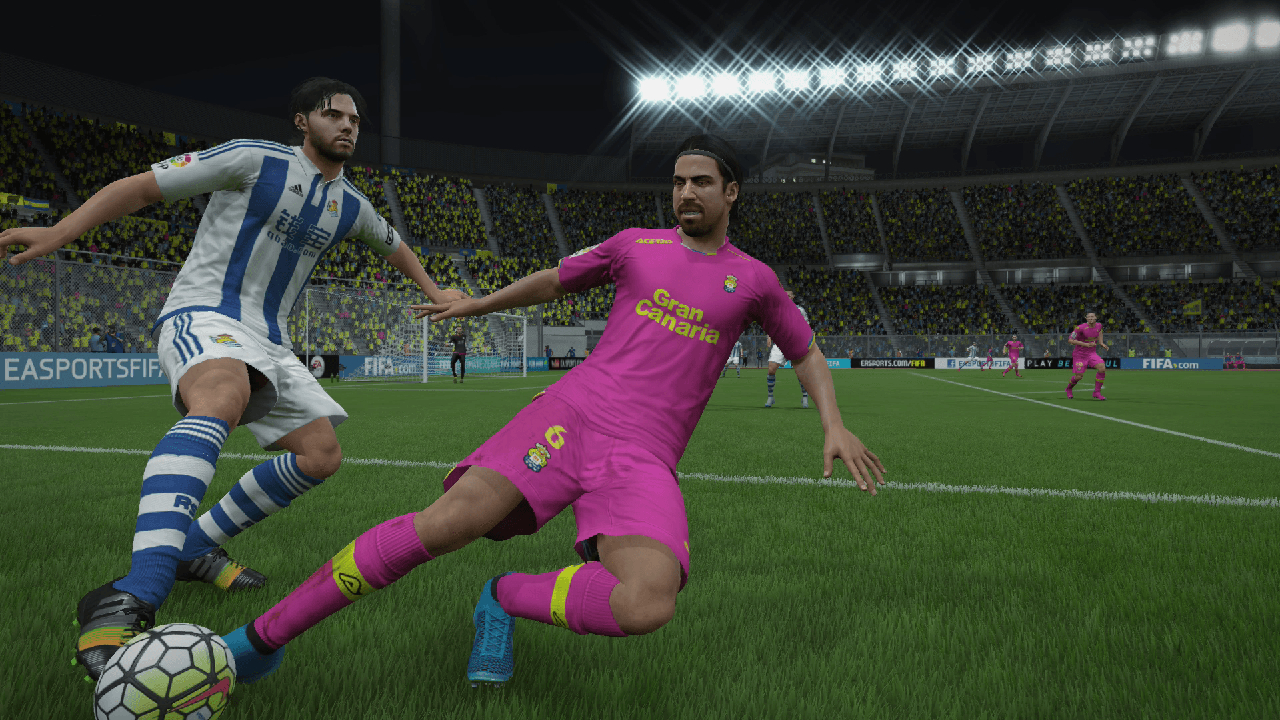 He’s not the same Nani as he was back in FIFA 13 on Manchester United but he still has the ‘it’ factor. He’s one of those FUT favorites that everyone loves because he has the ultimate trio: 80+ speed, 5 star skill moves and 85+ dribbling. Playing against opponents who use Nani is the most frustrating thing in the world. They use Nani like Skip to My Lou in the And 1 Streetball videos at Rucker Park. Others will vote for Yannick Bolasie and I can’t blame those who do, he’s the up and coming version of Nani and his Premier League credentials make him even that much more valuable. 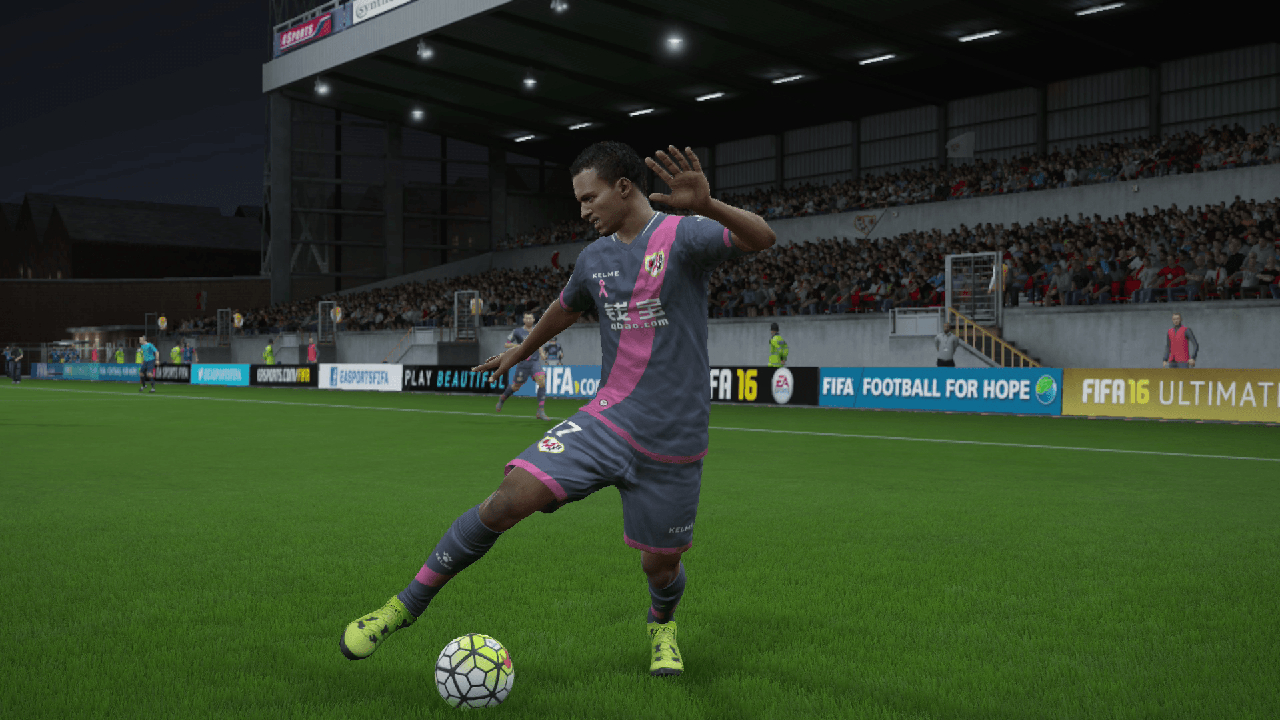 A year ago my vote would’ve been given to Hernanes who has been a staple on my Serie A squads throughout the years. He has an 86 long shots trait and 85 shot power. He hits absolute rockets at the goal and many of them find the back of the net while others fly into orbit – hence his 69 finishing ability. Gylfi Sigurdsson really splashed onto the scene this year scoring 11 EPL goals for Swansea City marking a career high. He was also a member of the underdog Iceland team who made the UEFA Euro 2016 semifinals. Sigurdsson doesn’t have the most powerful strike with 82 shot power but his is the most accurate with 78 finishing and 83 long shots. 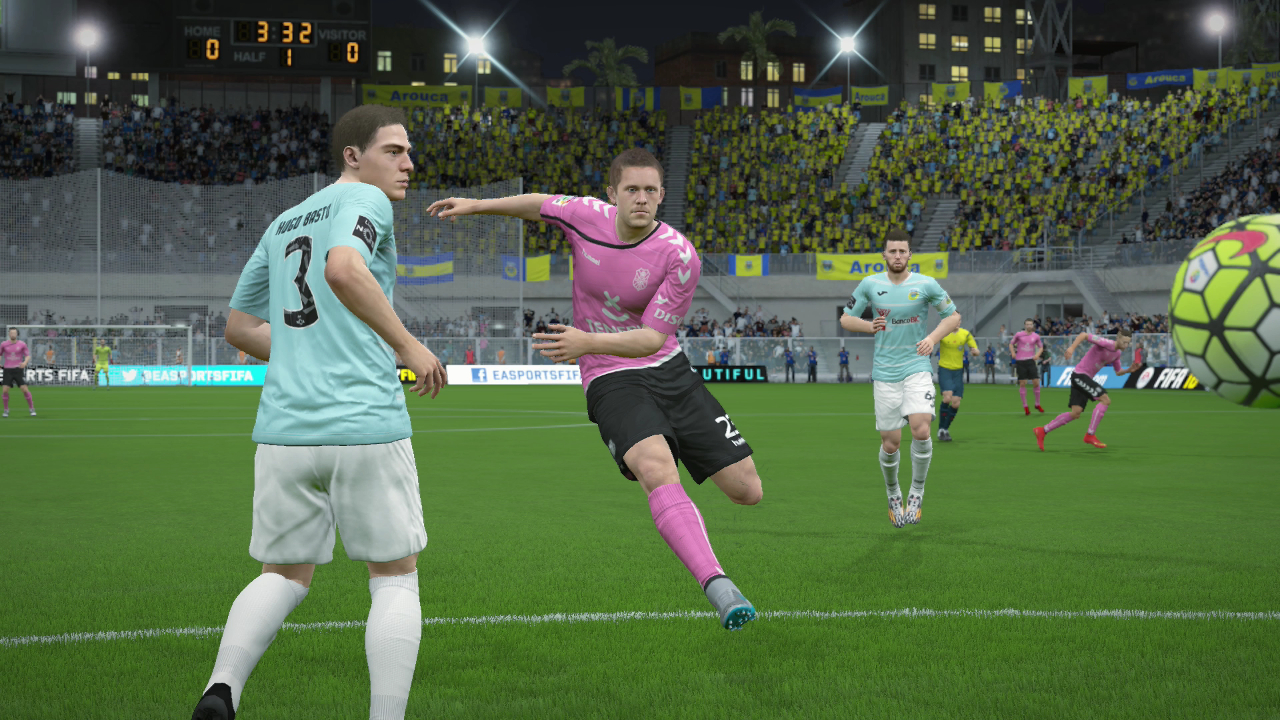 There’s nothing flashy about Mario Mandzukic but he’s a striker who always gets the job done. He doesn’t have great speed, his finishing is average but where he excels his through the air. With 90 headers, 85 positioning ratings and a power headers trait, Mandzukic is the definition of an aerial threat even at 6’1”. He’s not the player he once was at Bayern Munich from 2012 to 2014 when he was scoring 22 and 26 goals per season but he’s still quality goal scorer especially in the striker starved Serie A. The only higher rated base level striker in the Serie A is Gonzalo Higuain. 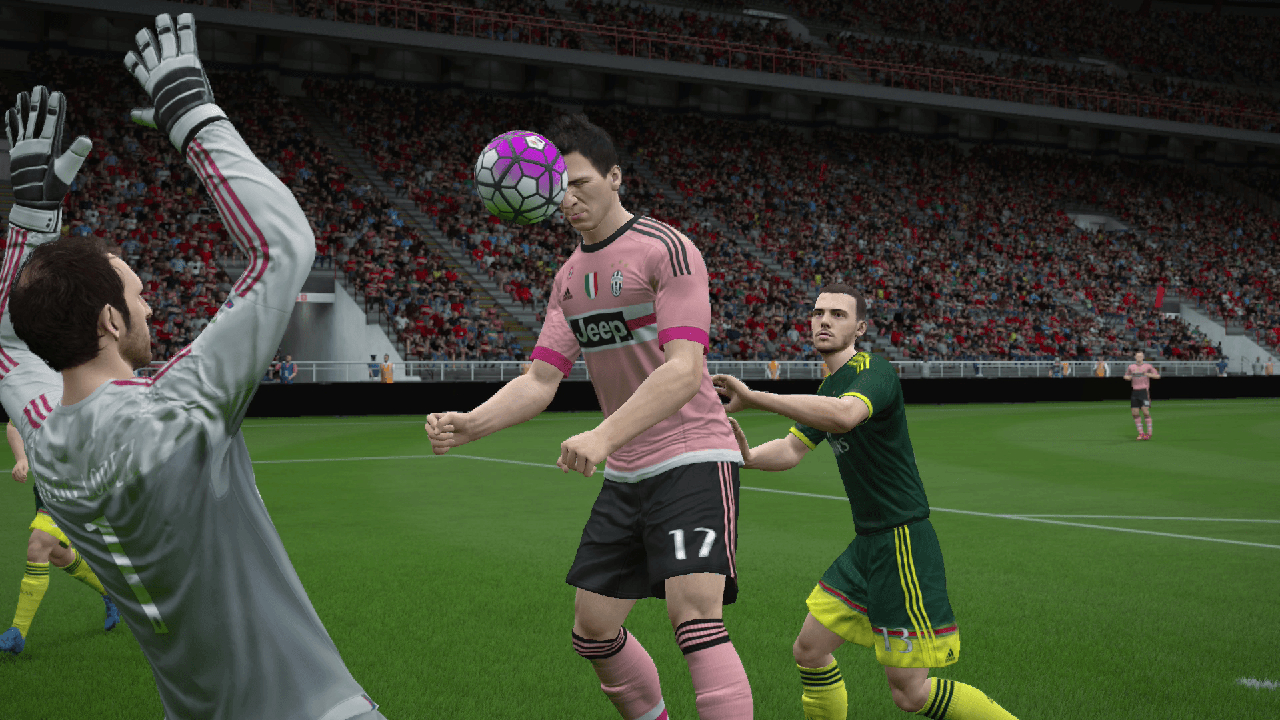 Sometimes overall rating really doesn’t do a player justice; a high rated player doesn’t live up to expectations while a lower rated player seems to be a diamond in the rough. Maybe it’s psychological or maybe there’s just something about that player’s make-up that doesn’t fit one’s style. In my case I happen to play miserably with Toni Kroos. When I use him I forget he’s even on the field. Yet when I insert Christian Eriksen into my team he’s a magician. Both players have 5 star weak foot skills and for me I’ve seen the electricity his left foot brings. And yes, in the screenshot below, that ball does curl around the defender and go in for a goal. With a player like Kroos who is very powerful and doesn’t have much speed it’s not front of mind to finesse a shot with his weak foot. 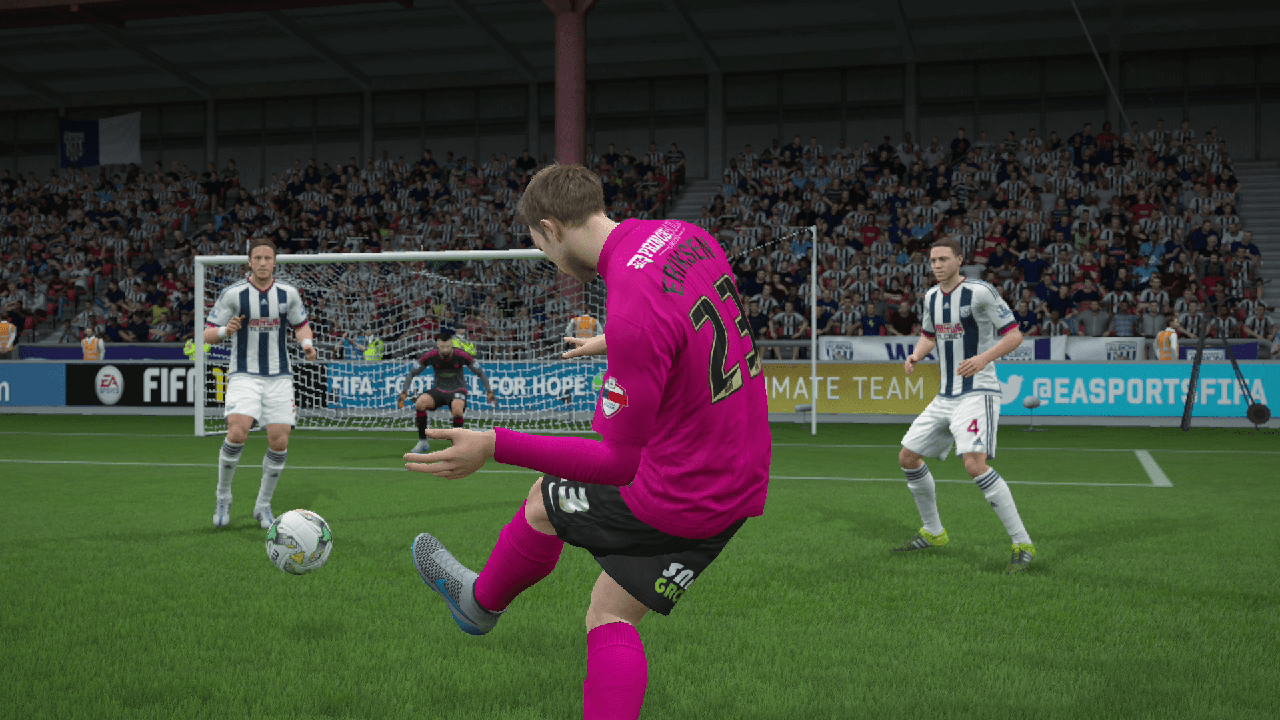 ONE CLUB MAN / MOST LOYAL

There’s something ironic about giving a loyalty award to John Terry given his alleged track record with teammate’s fiancees but I gotta give it to him here. Maybe it’s my Chelsea fan bias or maybe it’s the fact he’s 35 years old and still playing at a very high level in the world’s most competitive league. He’s appeared in 483 games for Chelsea having won 4 league titles, 5 FA Cups, 1 Champions League and 1 Europa League title. Terry is slower than a snail but his 87 defensive ability and 81 physical make him a very formidable opponent if positioned properly. It’s something rare that his rating has increased as he’s gotten older. Coming off Chelsea’s EPL Championship season his rating jumped from an 83 to 85, his highest overall since FIFA 12. 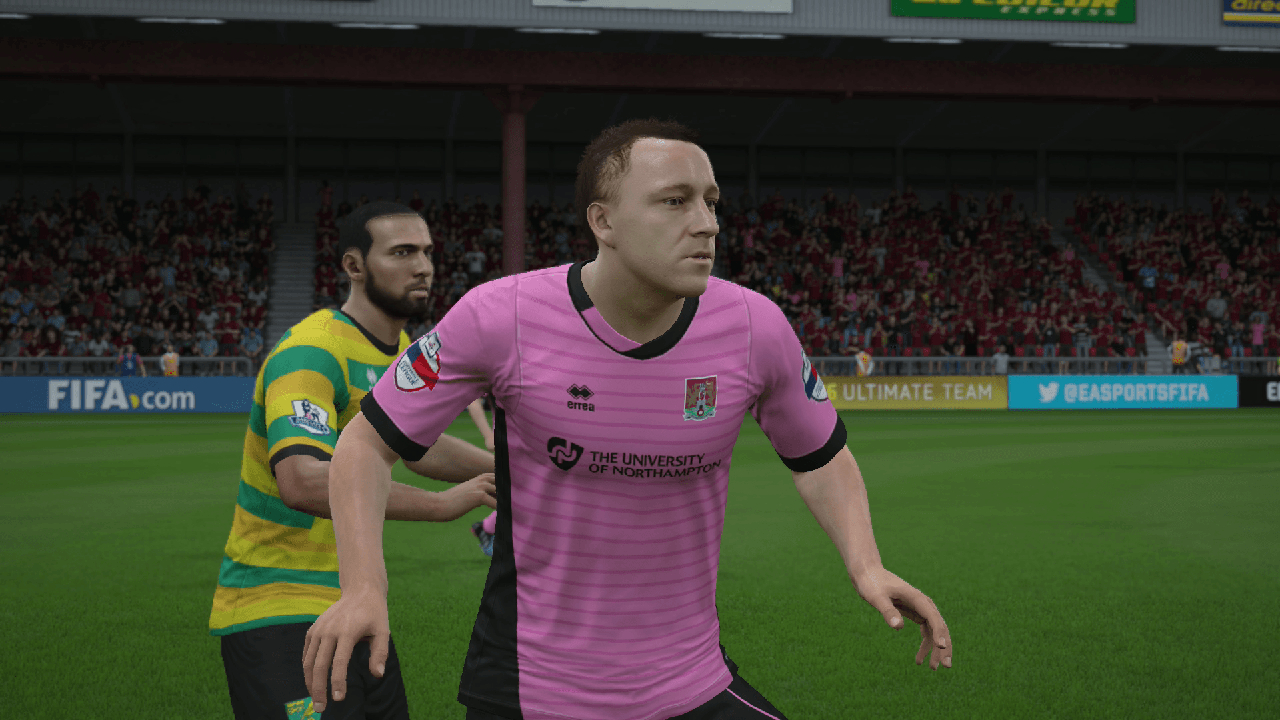 Cavani consistently has a strong overall rating (85/86/87 the past three seasons) and good performance statistics yet the market never values him high. He’s always a solid commodity buy for less than 3,000 coin with an 85+ rating. He’s a high work rate striker (90 stamina) with 85 ratings in long shot, finishing and positioning. Cavani has a knack for finding goals even if he’s not the most polished of strikers like a Luis Suarez. The 2016-2017 season could be a breakout year for Cavani who has been playing in the shadow of Zlatan Ibrahimovic at Paris St. Germain but make no mistake he’s been a FUT gem for years. Amazing that a guy who’s scored 185 club goals the past six season (31 per year) on two well known teams, Napoli and PSG, is somehow overlooked and under appreciated. 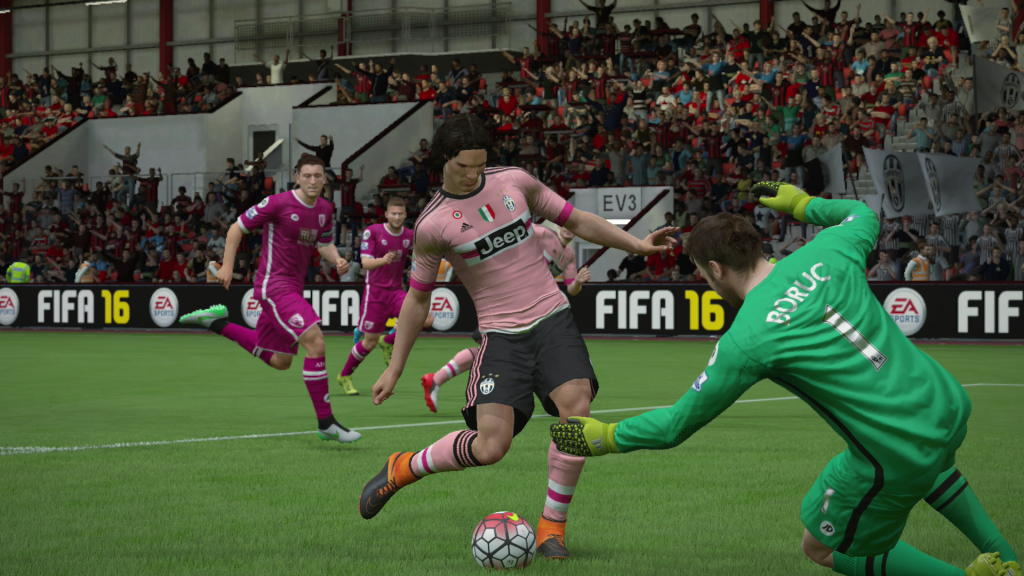 It’s impossible to talk about “most improved” in the 2015-2016 season without bringing up Leicester City. The 5,000-to-1 long shot to win the English Premier League went from relegation to promotion to champions in the matter of a few seasons. The greatest underdog story in the history of sports was led by two players: Riyad Mahrez and Jamie Vardy. There is no right or wrong answer on this one but I’m going with Mahrez based on the following: he finished 4th in EPL scoring with 17 goals and 6th in the league in assists with 11. He’s a true dual-threat player with 4 star weak foot and skilled moves. Vardy did break Ruud Van Nistelrooy’s EPL record for scoring in 11 consecutive games with 13 goals during that stretch. He finished second in the league in goals scored with 24. Both players were named to the EPL Team of the Season. Again between the two there is no wrong vote. 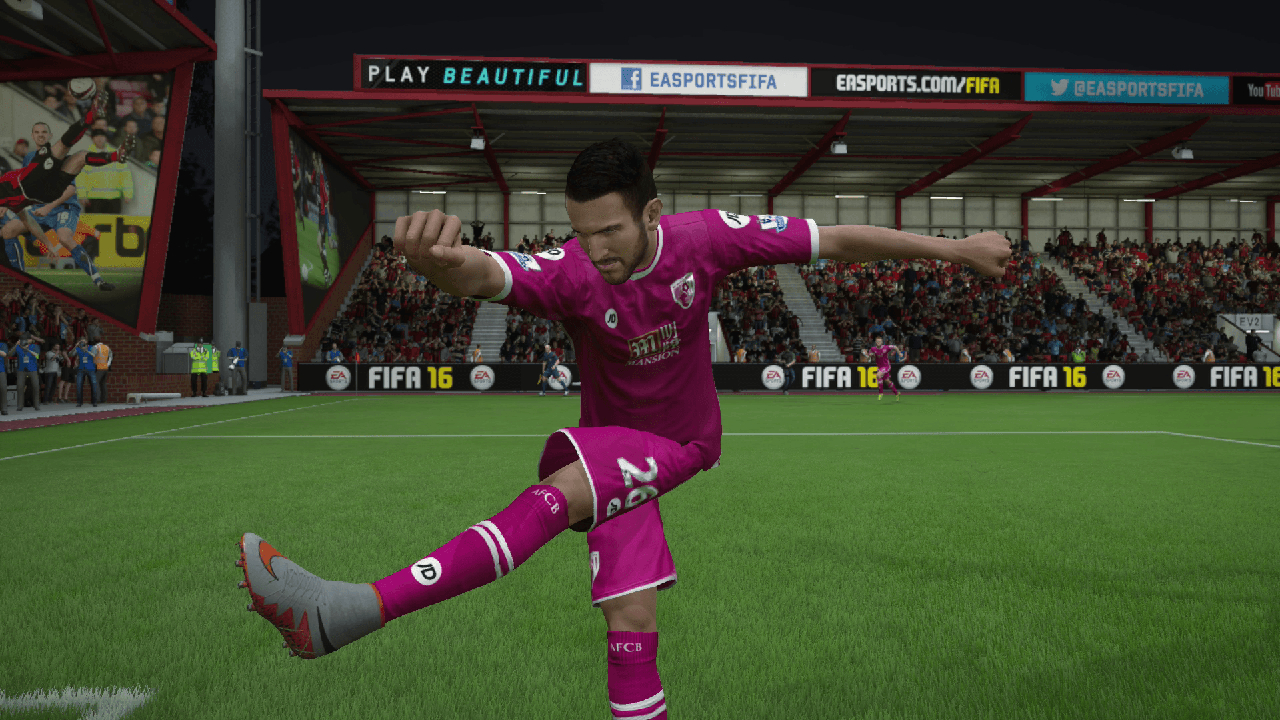 THE MAESTRO / MOST CREATIVE PLAYER

Now we’re getting into the ‘Best Picture’ territory and this is the toughest category so far to measure. I’ve used all four players this season and my initial response was to give the award to David Silva but then I changed my mind to Miram Pjanic only to switch my final vote to Mesut Ozil. The name maestro to me signifies a tiny little man orchestrating an offense, like a point guard, in a sneaky and clever way. Think Xavi or someone like Steve Nash was in basketball. David Silva appeared to be that guy but when you dig down deep Mesut Ozil is the deserving winner. He has a 96 vision rating which is highest in the game ahead of Messi, Pirlo and Iniesta. His overall passing is an 89 (91 short and 83 long), his reaction is an 88 with 91 ball control. When used properly he’s unflappable at the CAM position. It’s high praise but I’m calling him the closest thing that we’ve seen to Zinedine Zidane when it comes to dishing out assists. Ozil led the Premier League in assists in 2015-2016 with 19. 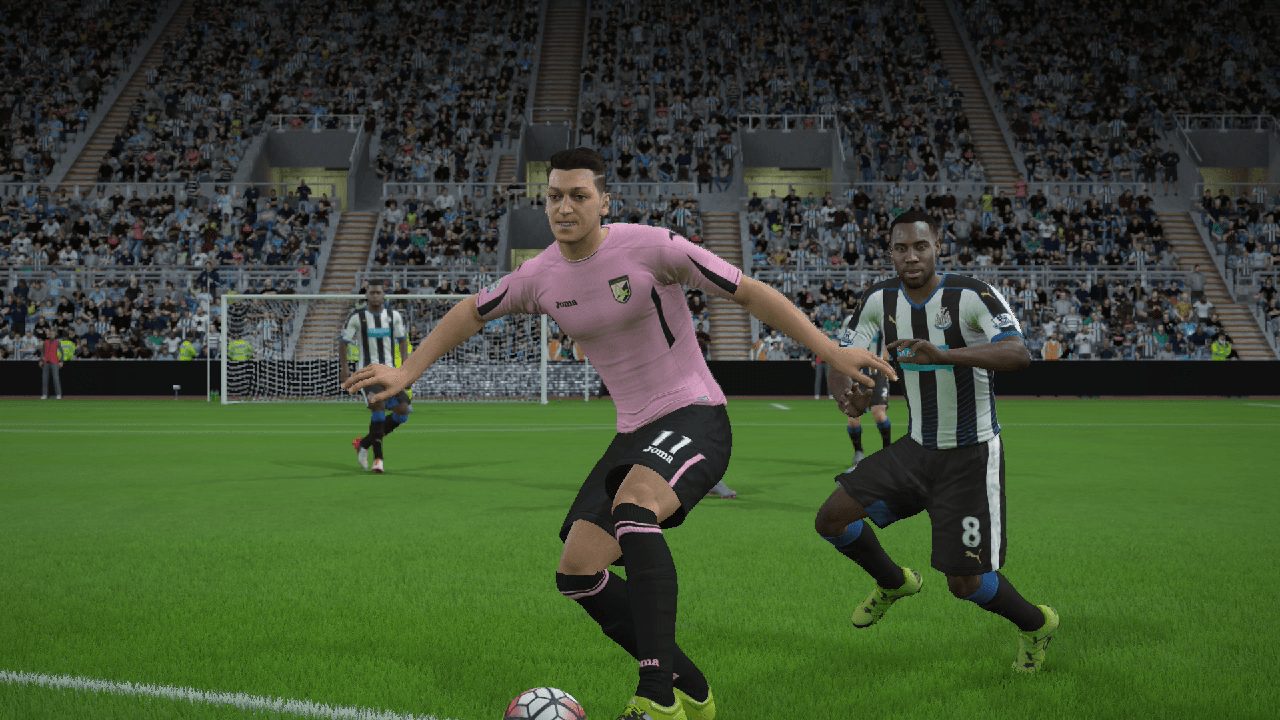 I love this category, and let’s just call it the ‘Lifetime Achievement Award.’ These are four modern day FUT legends and while I wish I could give the nod to Samuel Eto’o – one of my true favorites from back in FIFA 12 – it has to go to Chicharito. The man we affectionately call “Little Pea” was back with a vengeance in 2016 after a few vacant years. Hernandez was transferred to German club Bayer Leverkusen earlier in the season and lit the Bundesliga on fire. In 28 league appearances he scored 17 goals, 26 in all competitions. No one has a nose for goal like Chicharito, he’s the player who always hovers around the goal and the ball finds him; he’s the definition of a goal poacher with 88 finishing, 87 positioning, 82 heading and 85 jumping. 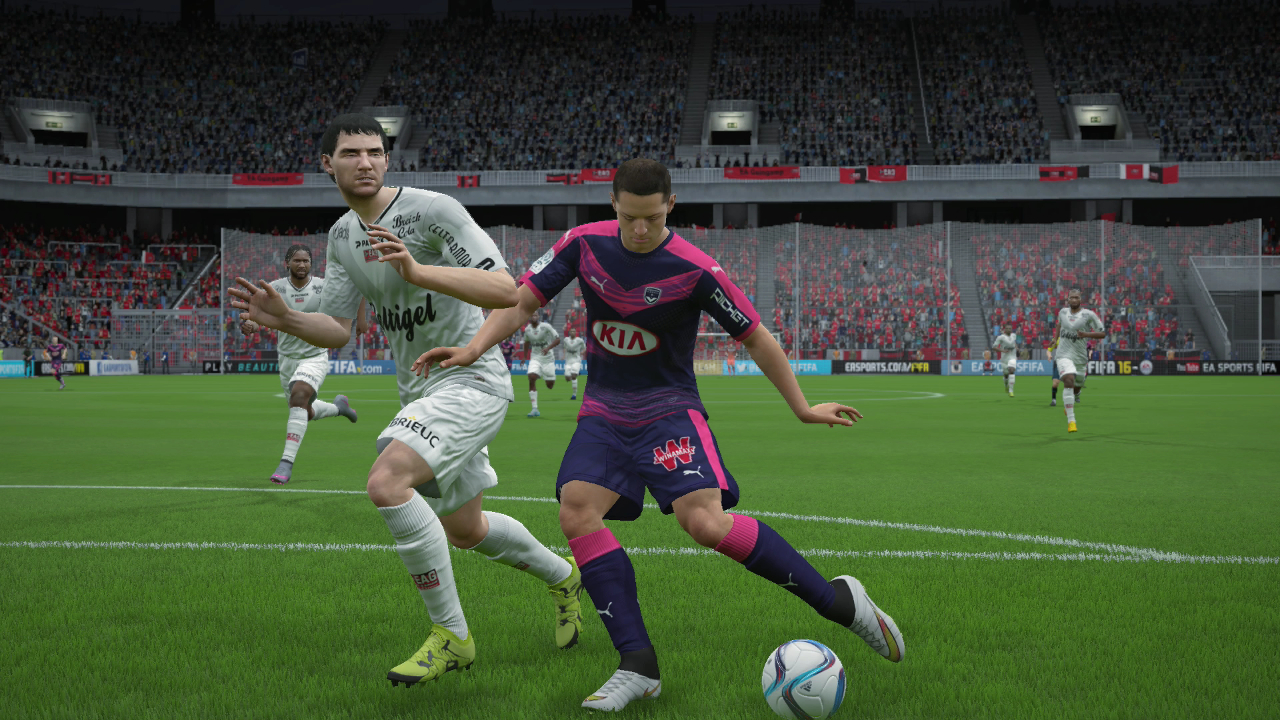