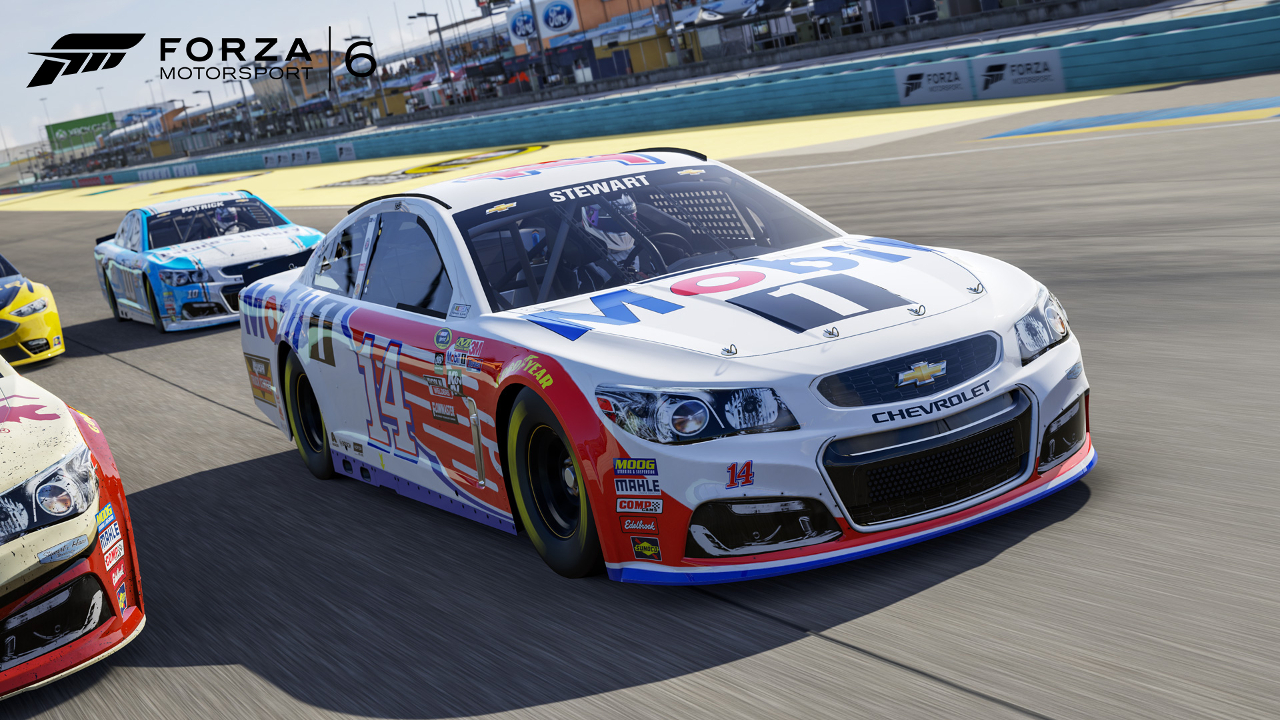 The announcement of the latest update to the (excellent) Forza 6 racing franchise on Xbox One – a NASCAR-licensed and theme expansion pack – was greeted with applause by racing game fans of all stripes. So, now that it’s out, we got two of our Hit The Pass racing gurus together to chat about it. Is it good? Is it great? Is it worth the $20 price tag?

So, how is the NASCAR Forza 6 DLC anyway?

The combination of NASCAR and Forza 6 – a well-established, popular racing brand and a wonderful driving simulation game exclusive to the Xbox One – seems like an act of brilliance. While they exist on PC and older gaming hardware, NASCAR-dedicated games have all but disappeared from the current generation of game consoles in favor of broader experiences.

You’d think that building a NASCAR experience on top of a beloved racing engine would offer the best of all worlds – familiar cars, tracks, and drivers integrated seamlessly into a proven game already in the hands of close to a million racing enthusiasts. Even more, there’s no NASCAR-themed competition at all on the Xbox One until (at least) this fall, with the just-announced NASCAR Heat Evolution.

So, that begs the question, Greg – is the NASCAR Forza 6 DLC a winner?

But once the euphoria of the announcement had worn off and my $20 had been spent, I have to admit to a bit of disappointment with the expansion. Only one new track and, essentially, one new car with a bunch of official re-skins. Not all that exciting.

Ok, so it’s not only me. I love Forza 6, and have spent dozens of hours playing it. I love NASCAR racing games of the past, too, and I think that’s where my biggest problem with this DLC originates.

Between the fact that I’ve played through a lot of Forza 6 scenarios, the new NASCAR challenges don’t resonate. They follow the same Forza model, which works great for non-NASCAR series but feels kinda….boring with stock cars. It would have been so much better to have some sort of a competition over the course of a bunch of races with other NASCAR drivers. Instead, we get some races in some different places but there’s no real payoff.

How about the actual driving, though? Does it feel at all like NASCAR to you in that sense?

You’re exactly right. While it’s great to have a few events where the entire field is made up of American stock cars, in the long run most of the challenges in the expansion consist of “what if NASCAR drivers competed on these world circuits against other types of cars?” Like, for instance, driving Yas Marina at night in the rain. In the game, the narrator treats the rain and the night time setting as extremely unique circumstances, though NASCAR drivers race at night fairly frequently, and running a road course in the rain became a common occurrence during the years that the Xfinity series was racing on the F1 circuit in Montreal.

Plus, for some inexplicable reason, the Yas Marina event didn’t actually include any rain or a wet track…

The actual driving is pretty great. I love the feel of Forza 6. Sure, it doesn’t feel as realistic as something like iRacing, but it’s a nice balance between sim and arcade handling. The NASCAR vehicles feel sufficiently big and top heavy, and create a nice sense of congestion in the opening turns when you get 24 of them together at the start. They feel particularly great on the road courses, a style of track where the big Sprint Cup cars routinely put on an excellent show in real life.

I have to express a bit of disappointment in the AI when it comes to drafting. Early on in the expansion we’re treated to a nice explanation of how drafting works, and how important it is in NASCAR when the Sprint Cup series visits the Daytona and Talladega Super Speedways. After a very thorough lesson, we’re dropped into a race at Daytona where absolutely none of what we’ve learned seems to apply.

This is something that even NASCAR-specific games have never been able to get right, so I can’t fault Turn 10 all that much, but the NASCAR experience at Daytona is not even remotely close to what you’d expect. On the default settings your car is so much faster than your 23 competitors that all you really need to do is jam the gas and stay off the wall to win. This is in stark contrast to real life, where the 43 car field bunches up and runs hundreds of laps within inches of one another. The game explanation is right – drafting is super important in this series. It just isn’t even slightly important in the game.

One thing that I do really like about the NASCAR DLC is the requirement to pit in some of the races. It adds a needed bit of strategy; the decision when to pit and when to keep on going has me constantly thinking ahead. I’m surprised that they don’t have it in every race, because it really is one of the very few differentiators of the NASCAR content versus the rest of the excellent Forza 6 package.

Have you tried any of the multiplayer yet? I’ve ventured in to both the leagues and the standard multiplayer but have not been successful at jumping into a competition. Either the community is so small that they’re just not there when I am or there are issues with the overall multiplayer features. I can never tell if it’s me, or if it’s the game. What’s your experience been there?

I haven’t played much of the multiplayer, but it feels like the problem is on your end. Every room I’ve connected to has been nearly full. The online racing is as good as ever, though you’re still at the mercy of the type of players you get matched up with.

The Quick Pit racing is a nice addition, though so far I haven’t really seen it affect much. The degradation of the tires isn’t noticeable enough to have much of an impact.

And that’s what makes covering a multiplayer title – or at least one with a significant multiplayer section – so difficult sometimes. Glad to hear your online racing experience has been good!

So the last, and probably most important questions, is a simple one. Is this NASCAR DLC worth $20?

Ultimately, I have to say no, this expansion isn’t worth $20. At the end of the day you’re getting a single track, essentially one new car and a series of official paint jobs. The curated events don’t offer much worthwhile, and the community would have taken care of the liveries had the DLC only featured a couple of designs.

We also heard from good friend Dave Benrey (aka @SenorNascar), and got his thoughts as well.

“I can tell you that it’s not bad but certainly lacking for anyone looking for a full NASCAR experience. Great graphics and sound and the handling isn’t bad either. It’s certainly not sim and lacks the depth of a NASCAR game. The pitstop idea is cool. It’s still lacking the strategy of NASCAR though. Overall it’s fun but not deep enough. I’m keeping my fingers crossed the NASCAR Heat game gives me what I’m looking for.”

So there you have it. The NASCAR Forza 6 DLC is pretty darned good, yet underwhelming. Whether that translates into a $20 value is dubious, though. One thing’s for sure – it’s not an automatic.