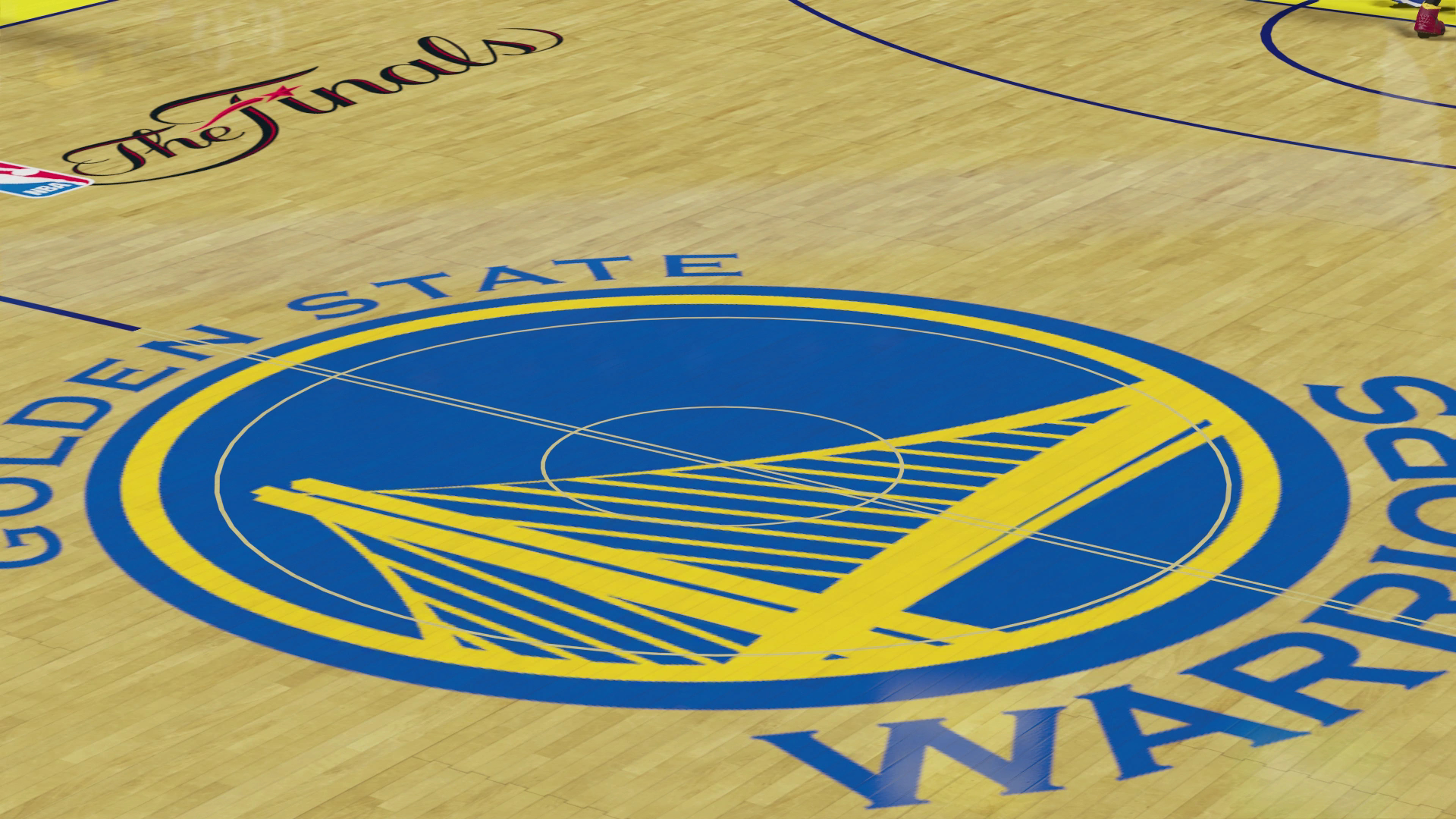 The 2015 NBA Finals are here, featuring the two teams that were clearly the best of their respective conferences. The Golden State Warriors and Cleveland Cavaliers both cruised to the Finals, setting up a compelling series featuring the reigning NBA MVP versus the all-around best player in the world.

Golden State is the favorite in the series, with odds suggesting they have around a 70% chance of winning their first championship since 1975.

What does NBA 2K15 predict will happen?

The process involved utilizing 2K’s MyLeague tools to exhaustively re-create both teams’ run to the Finals, then simulating and recording the entire series in real time. From the Warriors holding home-court advantage to the NBA Finals logo emblazoned on the hardwood, it’s as close as possible to mirroring what will happen in Oakland and Cleveland over the next two weeks. Minutes have even been adjusted for all players to reflect the amount they have been utilized in the playoffs, which includes Kyrie Irving having his time on the court shaved marginally due to his various ailments.

The Warriors enter Game One as 6 point favorites. Let’s find out what’s about to happen — according to NBA 2K15.

Both teams start tight, with each missing 5 of their first 7 shots. The Warriors in particular miss a number of shots from inside the paint. J.R. Smith opens things up a bit by knocking down a three.

Regular season MVP Stephen Curry pulls off a spin move and drives into the lane for his first bucket of the game.

Harrison Barnes is active early. He scores 6 of first 10 for the Warriors.

Klay Thompson heats up soon after that scoring 7 straight points to force a Cavs timeout.

The quarter ends however with the Cavaliers up 27-24. LeBron James scores 12 in the quarter and Steph Curry only 2. Curry didn’t have many clean looks at the basket and wasn’t particularly aggressive.

Neither team is able to break through in the first four minutes of the quarter. That’s when Kyrie Irving hits a three, and follows it up with another jumper to extend the Cavs lead to 8.

With the game starting to feel like it could get away from Golden State, Barnes hits a three. That led to a few being nailed from long range. One from Thompson and another from Barnes and soon after the Warriors would jump out in front.

With Curry not scoring, stuck on the 2 points though with 5 assists, Barnes and Thompson (14 points each) have picked up the slack. Warriors lead 51-46 at the break.

The Cavs open the quarter with an 8-0 run. Finally Steph Curry breaks out of his scoring drought

LeBron James hits a shot that simply can’t be defensed. He had a quiet second quarter but was back to being a force here.

J.R. Smith didn’t have a particularly good game but he hit some big, contested threes. Here he does it with Andrew Bogut in his face.

With the shot clock running down Kyrie Irving crosses-over Curry, drives, and gets the bucket and the foul.

A back and forth quarter ends with the score Cleveland 76, Golden State 71. Steph Curry scores 10 in the quarter to keep the Warriors from falling out of striking distance.

Those hoping for more drama out of The Finals than the last two rounds of the playoffs are in luck. The fourth quarter ahead is tense and exciting.

A big play early in the quarter as Andre Iguodala strips LeBron James, which leads to a fast break dunk from Shaun Livingston.

Tristan Thompson responds with a three-point play after getting an offensive rebound.

A series of threes follow in the quarter, including James’ first, Barnes immediately answering, and Curry’s long-awaited first.

The game remains tight and with just under 2 minutes to go James hits a go-ahead jumper, then follows it up with another score to extend the lead to 3.

Following a Curry lay-in, James finds Mozgov left free for a dunk. The Warriors would have an empty possession after which James would miss a shot but Tristan Thompson would get the offensive board, miss the putback, get another rebound, and that time convert for a 5 point lead.

The Warriors would score and get a stop. Down 3, with 5.3 seconds, Draymond Green hits the clutch three to tie it up!

With a chance to win the game, James drives and draws a foul. He steps to the line and hits the first. Since Golden State had no timeouts the miss on the second free throw was inconsequential. 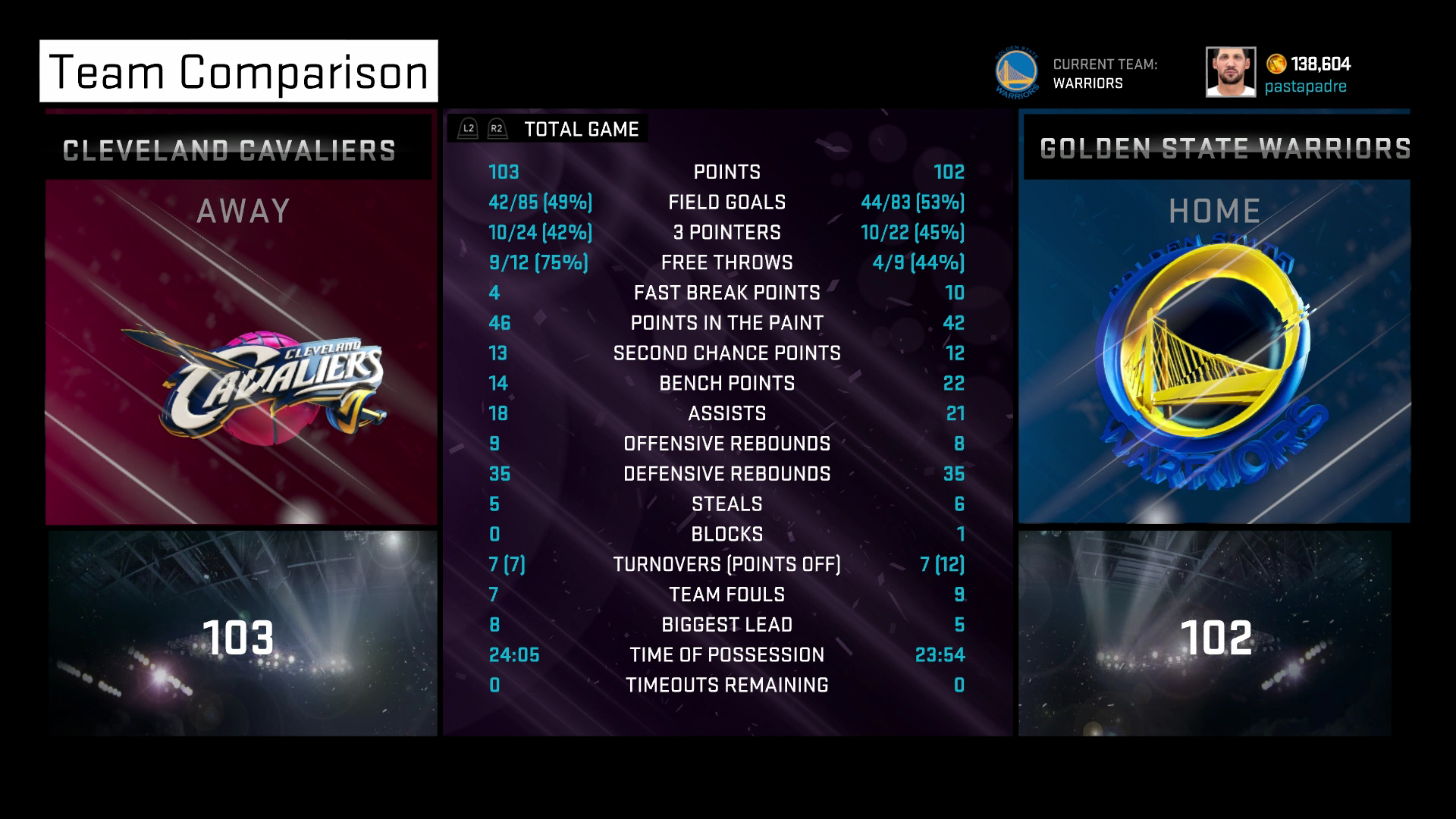 These two teams put up nearly identical statistics in every major category. The one area that favors a side over the other is free throws, where the Cavs went 9/12 while the Warriors only 4/9.

The biggest influence on the outcome however was LeBron James who, in the clutch, gave the Cavs a lead and ultimately put them in a situation where they would either win or go to overtime.

Rich’s Take: “I can’t imagine a more compelling game and ending. I never would have predicted this in real life, but watching the sim, I’m now convinced it could happen. I’m also convinced this will be Steph Curry’s worst scoring effort of the series (even if the dish numbers were nice), so the Cavs were both lucky and good to steal this one.”