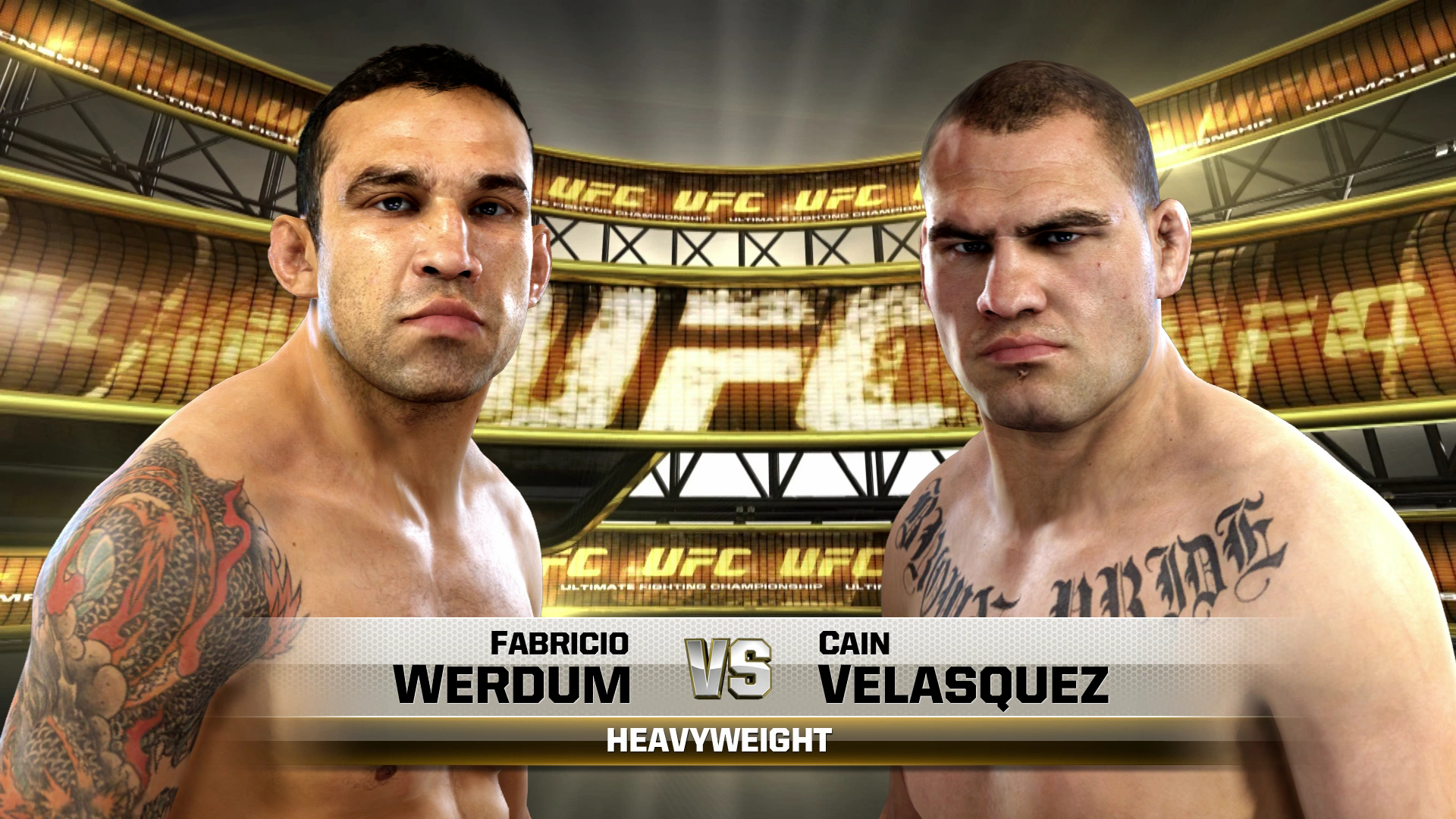 We simulate the UFC 188 main events with EA Sports UFC

This coming weekend, the big boys take to the cage to unify the currently fractured UFC heavyweight title. The previously undisputed champion Cain Velasquez returns from injury that kept him out for nearly two years to face a surging interim champion Fabricio Werdum.

With a top level Jiu-Jitsu game and Muay Thai that can stop a fight with any limb, Werdum has steamrolled through his last five opponents. He will need all that momentum to have a chance on Saturday.

Velasquez has stood as the most dominant heavyweight in the modern era and has only one blemish on his record. His wrestling is second to none; when coupled with his sound boxing, it makes him the most complete fighter in his division.

The x-factor in the UFC 188 main event will be speed and cardio. Velasquez possesses both of those qualities in spades. Will Werdum’s slight technical edge and experience be enough to overcome a returning, hungry champion? Let’s go to The Simulation Room and and find out.

The fight starts with Velasquez pressing the action. Werdum is able to control the range, though, and gets the better of the initial exchanges. Cain quickly realizes he needs to change the momentum and secures a takedown at the 4:21 mark. He does score a few points here, but Werdum gets up quickly after a few well-timed guard passes.

The range game continues to work for Werdum. However, he gets a little too comfortable and eats some hard shots leading to an ill-advised takedown attempt. Velasquez takes advantage of this and starts to do some good ground work. Velasquez secures full mount on the decorated black belt Werdum.

Suddenly at the 3:21 mark, Velasquez goes away from his bread and butter ground and pound, and attempts to set up a submission. He almost catches Werdum sleeping and gets dangerously close to becoming the first man to submit him in MMA competition. That pipe dream quickly fades as Werdum adjusts and bucks back to his feet.

Werdum gets right back to it as he lands a vicious body kick at the 2:45 mark that leaves Velasquez visibly stunned. Velasquez is visibly angry as he begins to wildly fire back. Werdum channels Ali during this barrage and slips every punch that comes his way. After some brief ground action, Werdum drops a crisp three-strike combination at 1:42.

The remainder of the round is a clinic by Fabricio. If this round was up for grabs before the last minute, Werdum seals it with some dynamic striking. The round goes to Werdum 10-9.

Reality Check: A round like this could only happen if Velasquez has some major ring rust. I do think he will start slowly, but the likelihood of him getting tattooed like this seems small; no one has ever come close to bullying him in that manner.

Werdum hits the ground running and lands a masterful six-strike flurry at 4:56. This puts Velasquez on his heels. At 4:47, a nasty high kick drops Cain and he looks to be in serious trouble. He is followed to the ground and has to fight for his life under heavy assault.

He somehow gets to his feet but continues to get outclassed. Werdum gets a little too aggressive at 4:07 and allows Velasquez back into this fight with a head kick. This seems to turn the tide of this round – at least for a moment.

The action evens out a bit as Velasquez starts to shake the rust and get some footing in this fight. The middle minutes of the round are fairly even.

Just as it seems Velasquez may be back to form, he is clipped by a superman punch at 0:08 that crumbles him to the mat. He is out of the fight at this point, but is saved by the bell. Round goes to Werdum 10-9

Reality Check: Cain being extremely rusty could only explain a round like this. Sharp-shooting with all four limbs and controlling distance are Werdum’s best paths to victory. Still, until someone is able impose their will on Velasquez like this, I have to assume it’s an almost impossible task.

Werdum knows that he is controlling the fight now. He comes out and starts to pick Velasquez apart immediately. His hands are really flowing here as he executes another great combo at 4:35. Ground dominance appears to have left Velasquez at this point as he is unable to deliver any significant damage after securing another takedown.

A small shift in momentum occurs at 3:25 as Velasquez is finally able to get the best of an exchange. He gets a little rhythm going and it even starts to look like he may salvage the round.

Then the last minute rolls in, and it is a real bad one for Velasquez. A slick fake-break and strike by Werdum highlights this at 0:22. All and all it’s another terrible round for Velasquez. This is really turning into a repeat of the fight that Werdum handily won against Travis Browne. The round goes to Werdum 10-9.

Reality check: The coaching team for Velasquez would be screaming at him on high if he fought at this range, as Werdum would be in his element if given the ring space he had in this round. This could be how Werdum finds a way to win. I believe that the plan will be to get inside of Werdum’s range and cut off his movement.  Moving forward is Velasquez’s style, and I don’t see him deviating from that.

The corner for Velasquez has to know that he needs a finish to win at this point. He comes out strong with a catch-take down at 4:54 and gets some offense going on the ground. Again Werdum is able to work out and back to his feet.

Engagements are becoming less one-sided but Cain still can’t get any extended rallies going. He is getting the better of it in this round, but only by a slim margin. A slam at 0:58 caps the first winning round for Velasquez. He again desperately goes for a guillotine as time expires as he knows taking rounds now won’t win him the fight. Nonetheless the round goes to Velasquez 10-9.

Reality Check: I don’t think Werdum can keep pace with a fully-functional Valasquez this late in the fight. He may be able to have a similar level of success if his opponent is flat where he has done some damage before this point. The simulation shows Werdum using space and range effectively, which will be critical to his game plan. A round four like this could be plausible.

The round starts off with Velasquez lacking a sense of urgency that you’d hope would be there. He has lost the fight on the cards at this point but still seems content to work at boxing range. He looks to be gassed and is failing to capitalize in opening like the one at 2:29.

Werdum is content to stay well on the outside here and seemingly concede the round. It a formality now, but Velasquez wins round five 10-9.

Reality Check: As alluded to before, this fight looks very similar to the contest between Werdum and Travis Browne in April of last year. This is the fight flow that he wants, and it’s the way that he has the best chance of winning. With the track record Velasquez has with stamina it’s hard to believe that he would come out this tentative and rusty. If he were to fall behind like this I believe he would come out guns blazing in a round five.

The final determination and prediction

This simulation could not have gone much better for Werdum. Trying to win on points is a solid strategy for him here. Velasquez’s extended time off due to injury looked like it had been programmed in somehow. Werdum won the fight on the judges’ cards 49-46, 48-47, and 48-47. 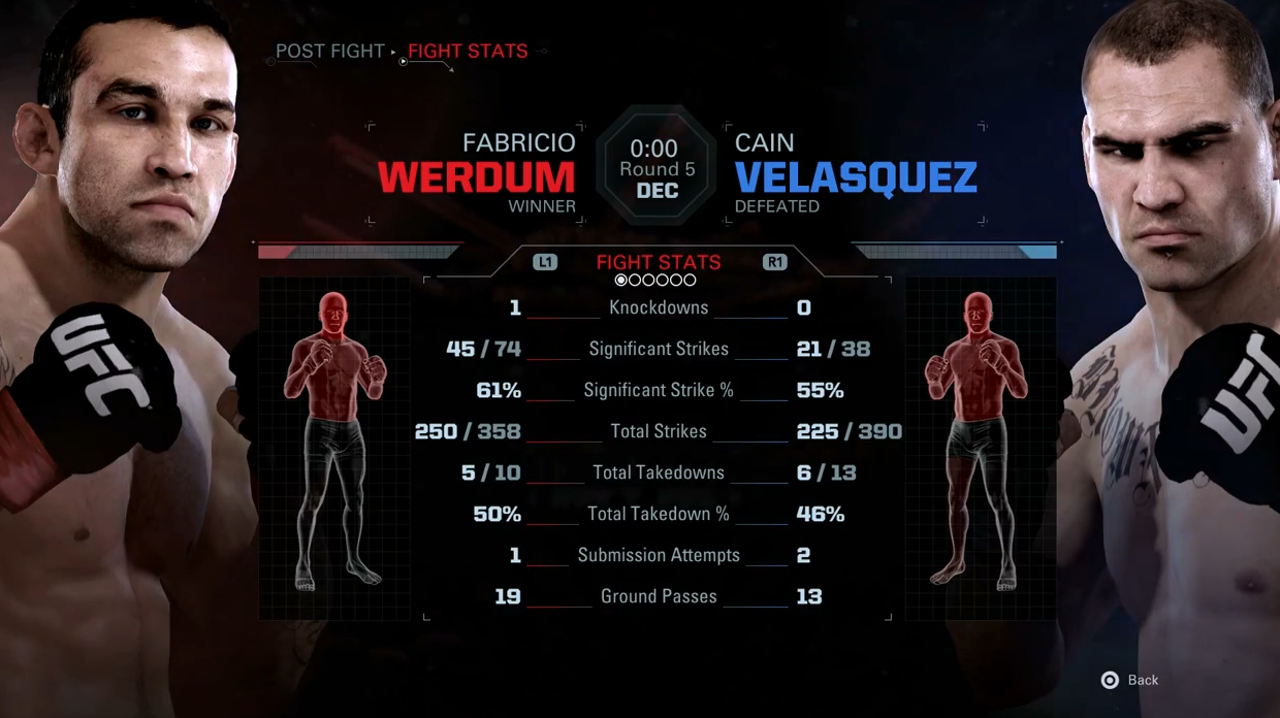 This simulation deserves credit for playing out realistically, but fists raining down from Velasquez could have ended it in an instant.

It’s worth noting that several simulations were run – upwards of 10 due to curiosity – and Werdum controlled almost every one of them. So EA Sports UFC seems to think he has a clear edge. This simulation was very much representative of that and was no fluke.

The stars seem aligned for Werdum. A current run of success combined with Velasquez’s injury and long layoff all point to a potential victory – even though the Vegas odds have him as a huge underdog. There really couldn’t be a better set of circumstances for him coming into this fight.

Unfortunately, he’s facing a wrecking machine in Velasquez that no one has been able to slow without a well-timed one-punch knockout. Speed is Werdum’s biggest weakness. Fighters with fast hands have given him trouble in the past, and that will be his undoing here. Velasquez will start a little slower than normal but quickly find his pace. He’ll land an uppercut in round two that ends the fight and unifies the title.

Bonus time! Let’s see how EA Sports UFC projects the co-main event will play out. This fight features two men willing to stand in the pocket and trade; a brutal slugfest looms between these two fighters as they both look to climb back up the lightweight ladder. 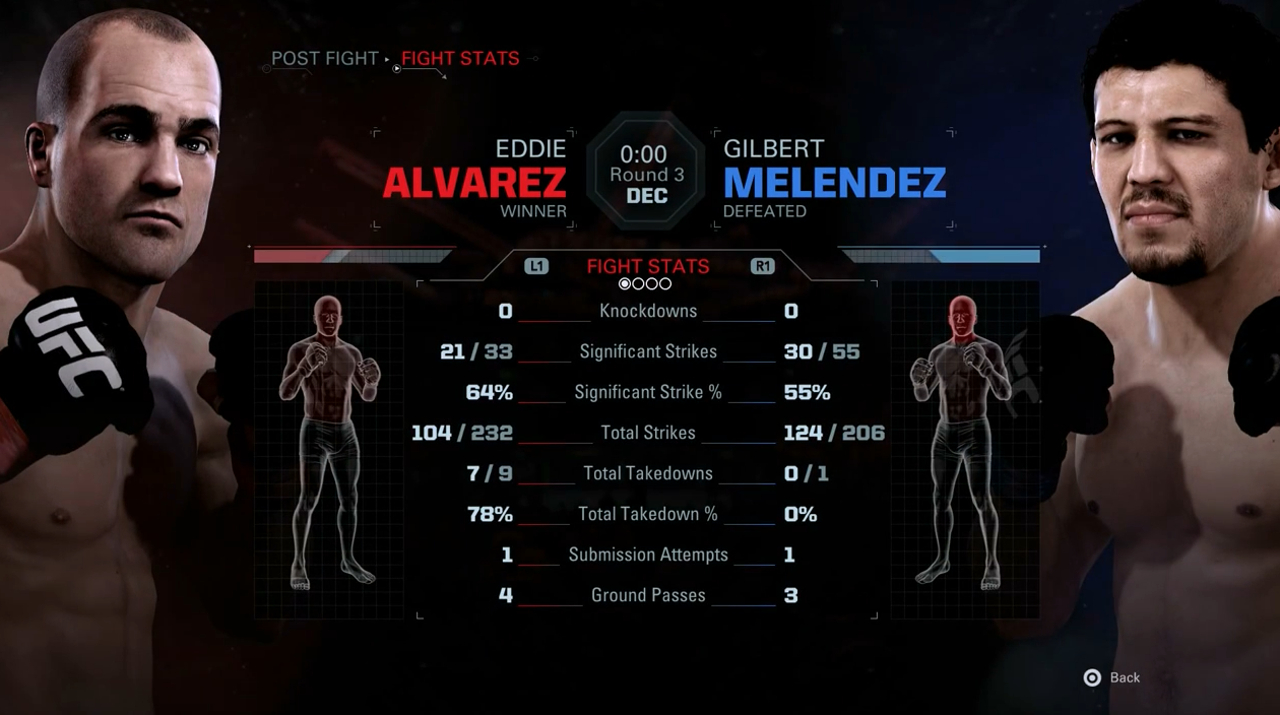 The simulation played out fairly close to what I would expect, other than the edge being given to Eddie Alvarez for his wrestling skills. That’s what made the difference in the sim, as Alvarez wins by unanimous decision.

Everything was fairly even, leaving Alvarez’s takedowns to win the rounds. This simulation is realistic, with the glaring exception of the amount of wrestling that took place. I expect the real fight will stay on the feet, and I also believe Gilbert Melendez will give the better of it. Look for Melendez to take it by split decision in a close and exciting affair.