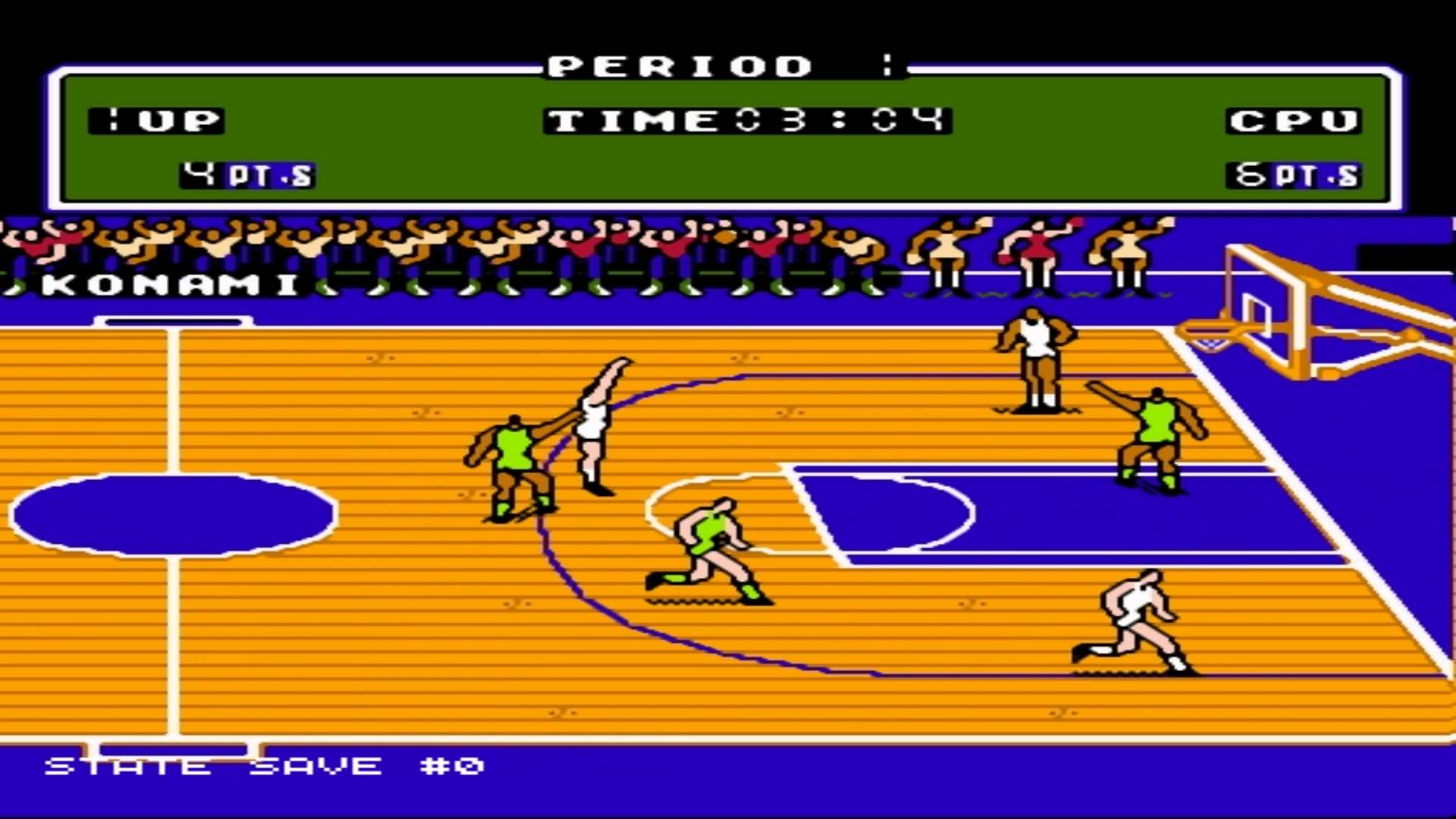 What was your first favorite sports game?

Everyone that enjoys sports video games has that first love – the title that meant so much more than just virtually running or throwing for a winning score. What was the one that truly grabbed you and wouldn’t let go? What was the game that shaped in your young mind what sports video games could actually mean? What had you altering your life just to get in one more game? We asked the Hit The Pass contributors and community what that was, and the answers vary across the board.

I feel like I need to cheat just a little bit on this one since both of these games were released in succession – the two games that really made my love for sports games redline were Tecmo’s Tecmo Bowl and Konami’s Double Dribble. They were remarkably compelling and did an exceptional job of representing their respective sports.

Despite the former’s penchant for stirring the nostalgic heart of many a sports gamer, though, it was the latter that entered my home, and thus, my heart first.

While there were so many things to love about this game; the announcer screaming “Double Dribble” at the launch screen, the halftime show, the ¾ court three point shot, I would say that the most exhilarating feature of this game was the dunking cutscenes. Driving the lane rewarded the player with a wonderful cinematic stop motion animation of a variety of dunks.

Reverse dunks, tomahawks, two-handed slams, everything was represented! Countless nights, with my cousin mostly, were spent playing Double Dribble with its time setting set to “epic”. Games would end 185 to 184. Many of these games would fall victim to the NES’ lint graphical glitch before the end but we would soldier on. Sweet memories!

I didn’t play a lot of sports games growing up, mostly because I wasn’t much of a sports fan. I remember Bases Loaded, of course, and there was one torrid summer spent with Tecmo Bowl, but otherwise my attention was largely devoted to the likes of Mega Man.

That all changed in 2000, which was the year that the PlayStation 2 came out. My first sight of the Trans World Dome (now the Edward Jones Dome) in Madden 2001 was a mind-blowing moment. The players had strangely blank eyes and slack expressions, heightening the otherwordly feeling that we’ve come to know as the uncanny valley, but their uniforms and helmets were incredibly detailed. For the first time, Madden at least somewhat resembled what I saw on TV.

Having gotten into sports a couple years before, when my admission to my school’s marching band happily coincided with the explosion of the ’98 Vikings, I became completely engrossed in Madden‘s franchise mode. With the help of fantasy draft and a few wholly unrealistic trades, I soon had a young Peyton Manning throwing to a young Randy Moss, with Warren Sapp on the defensive line. It was addictive, and I ended up spending much of the fall and winter with Madden.

A little later, I picked up NHL 2001 on the PC; and again, with the help of the fantasy draft, I loaded up the expansion Minnesota Wild with stars like Adam Foote and Keith Tkachuk and won the Stanley Cup (my drafting strategy revolved completely around who had the little hammer next to their name indicating that they were a heavy hitter, which would allow them to literally knock an opponent across the rink). I have equally fond memories of NHL 2001, and later NFL 2K1, but Madden 2001 was my first.

Of course, Madden 2001 and its ilk look positively stone age compared to today’s sports sims. But I’ve never been quite as blown away by a sports sim as when I booted up Madden 2001 for the first time. The curve of improvement has been relentless but gradual, leaving the giant leaps of Madden 2001 and NFL 2K in the past. I suspect we’ll never see their like again.

I’m going old school with my first favorite sports game. My pick is the arcade classic Run and Gun from Konami.

1993 spawned two of the best basketball games to ever be released, NBA JAM and Run and Gun. Two very different games with distinct styles that gave birth to legitimizing Basketball as a digital sport. Innovations like dual connected screens that only gave your team’s perspective made for a fresh take on competitive gaming. You could say that it was the first versions of remote gaming because of the feeling of not playing someone directly next to you. Teams – although not NBA licensed – resembled their real life counterparts in both style and substance. You knew when playing with the New York team that your center would be the focus of your offense. Los Angeles was speedy and nimble.

You could play like your favorite squad but not have the baggage that came along with it. Gameplay was swift, dunks had weight and graphically it was pretty ahead of its time using large sprites that felt massive on those old CRT screens. To this day the attract sounds from a Run and Gun machine will bring about huge smiles and bottomless tokens from my pockets. It has been and might well be the most fun version of roundball for me.

As the senior member of this group, allow me to hop in the DeLorean and set the control panel to 1979.

That was the year we got an Intellivision game console and a game called NFL Football. The cover of the box was classic 1970s lunch box-style art, with a collage of pictures but no use of actual team logos. They had an NFL liscence but only used the league logo. There was no mention of actual teams or their players anywhere in the game. That didn’t matter. It said “NFL Football” on the box! It was legit.

What the game did have was a 100 yard scrolling field, some weird static sound that was supposed to be crowd noise (It sounded more like aliens trying to make contact, but whatever), 5-on-5 action with 4 guys on each side in human-like shapes and matching colors. Light blue on one side, yellow on the other. And then a main guy on each team, one black and one orange. There was play-calling capbility using a 4-number combination on the overlay that allowed for multiple play sets. It was like entering some kind of passcode to a bank vault to call a play. It was intricate and awesome. If I had to bet I would say my go-to play was 9-2-7-5 but I can’t swear by that.

You could run and pass and even do a modified play-action pass by kind of bootlegging and then throwing down field. Defensive players shifted at the line of scrimmage. I was 12 years old. This was mezmerizing stuff. Before Intellivision football pretty much all I had played was Pong. It was like going from dating Olive Oil to dating Olivia Munn.

It was so mezmerizing that I found a way to use our BetaMax (that’s right, we were the family that didn’t have a VHS. We had a BetaMax, but that’s a whole other article), to record my Intellivision football games. When I finished a game I would go back and watch the tape and record my statistics.

Intellivision NFL Football set me on a life-long love of sports video games. So allow me an old guy moment when I say; bitch about the game-play in Madden all you want. You have no idea how good you have it. In 1979, when I was 12, I never had it better.

For me, there’s only one answer: NBA Jam.

Basketball has always been one of the sports that I’ve never really connected with, but NBA Jam made me take notice. The game dispensed with most of the rules and intricate strategies and just let players play. Huge dunks, knocking down other players to steal the ball, shattering the backboard in the fourth quarter, and hitting a half-court shot to pull off the win with 0.3 seconds left in the game are all synonymous with NBA Jam— and all happened to me the very first time that I played the game in a Worcester, Massachusetts arcade way back in 1993. I was hooked from that first game on, and it remains the one arcade cabinet that I’d love to own someday.

While I have enjoyed sports video games since the first time I played an Atari 2600, without a doubt the title that grabbed me and didn’t let go was MicroLeague Baseball on the Apple IIe. It captivated me in a way that no game did before – or since, for that matter.

It wasn’t just the huge roster of classic baseball teams, or the impeccable strategy you needed to be successful, or the bloops and blips of the crowd or batted balls or seventh inning stretch; it was all of those and more. MicroLeague Baseball took what Strat-O-Matic achieved with cardboard and paper and brought it to life in a way I’d never imagined.

I spent countless hours battling the computer and my friends in MicroLeague. We played entire seasons, compiling statistics and winning pennants. I’d never been able to have my baseball fantasies be so real; it was unforgettable and that feeling stays with me to this very day.

@HitThePass Blades of Steel. Simple perfection. Love racing games but a lot of team sports left me in the dust due to being overly complex.

@HitThePass Baseball Stars was the 1st to hook me. Could edit roster names and ratings. Set me on the path to video game addiction!

@HitThePass Sensible World of Soccer on the Amiga. By far my most played game of all time.

@HitThePass Sensible World of Soccer. A rare case of a game that the core mechanics are still fun to play 20 years later.

@HitThePass @RichGrisham madden 06. Superstar mode in its original form was exactly what we wanted as a SP mode

@HitThePass Madden 2005. First sports game I ever played, and a lot of the songs from its soundtrack still get stuck in my head today.

@HitThePass Madden and I’ve been stuck since pic.twitter.com/accNaDurST